Hope is the Saddest 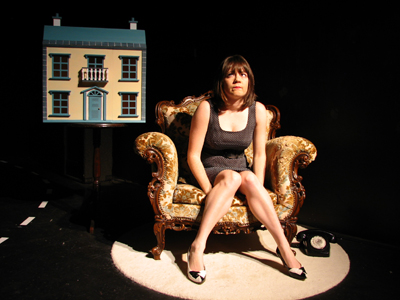 Michelle Robin Anderson in HOPE IS THE SADDEST. Photo by Theo Therday.

BOTTOM LINE: This Australian dark comedy is an entertaining examination of three secluded souls trying to love while they are watched over by the almighty Dolly Parton.

Despite her effervescent personality there has always been something very lonely to me about a Dolly Parton song. This is especially true when you take away the visual exuberance of Dolly herself and play a record album detaching her voice with a crackle. She makes the heartland sound hauntingly beautiful in its optimism in the good times and bad. In the Aussie-export play Hope is the Saddest now playing at the NY Fringe Festival, Dolly Parton is represented in much the same way. Direct from the National Arts Festival of South Africa, this small yet fascinating play will stick in your head and ears.

Writer director Jeffrey Jay Fowler and his fellow theatre-makers spent hours listening to the entire Dolly Parton catalogue for inspiration for this play which he calls “a bright black comedy about death, delusion and Dolly Parton.” The central set piece is a cardboard cutout of Dolly, once again representing this iconic figure in a peculiar and detached way. While Dolly is a real human being, we learn through the play that her worshippers are obsessed with an illusion as artificial as Dollywood.

The owner of the life size Dolly is named Hope herself (played by Michelle Robin Anderson). She lives in some form of suburbia all alone with her shrine to the American songwriter and hundreds of song lyrics and quotes at the ready to solve all of life’s problems. She is one of three characters in an impossible love triangle that begins the day she finds a cyclist on the road covered in blood after being hit by a car. The cyclist is Theo (played by Fowler) who is quickly open about the fact that he is homosexual and has a boyfriend. However, after a friendship kindles between the maternal Hope and Theo, Hope decides that she loves Theo and his homosexuality is a mere inconvenience that can be overcome with a littler persistence and inspiration from Dolly.

The third character in the mix is Marion (Natalie Holmwood) who is the culprit of Theo’s accident. She committed a hit-and-run and decides to bury her car in her back yard to hide the evidence -- the logistics of this decision are never really explained, which is part of the beauty of Fowler’s minimalistic design and structure. Marion encounters the victim and his new admirer on the street and decides to pay Hope a visit. Hope quickly teaches Marion the wonders of Dolly Parton dressing her in a replica of the red dress Dolly wore in the film The Best Little Whorehouse in Texas. She also proceeds to inebriate Marion which leads to a chance encounter between Marion and Theo who commit an action which complicates everyone’s lives.

Fowler and his fellow devisors are clearly interested in the absurdness of what happens when lonely people reach out beyond their insecure islands for love. The peculiarities of each character are made remarkably believable thanks to Fowler’s wit and the extraordinarily specific peformances by these very talented young Australian actors. The theatricality of the dialogue and the staging, while beautiful, come at a cost, however. It keeps the audience from ever becoming truly emotionally invested in these characters and they instead remain trapped in this "bubble world." Much like Dolly’s crackled twang, the beauty and talent show through but the humanity remains elusive if you try to wrap your arms around the cardboard cutout.