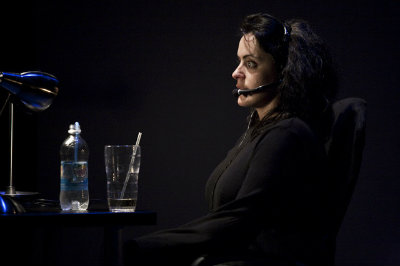 BOTTOM LINE: A funny, sad and thought-provoking story about a phone sex operator without hands.

Mare Pines is the sultry, staunch and crippled protagonist of James Ryan Caldwell’s new play Fantasy Artists. After losing both of her hands in a far-off episode she’d rather not revisit, Mare has found her niche as a phone sex operator or, as she prefers to call it, a “fantasy artist.” We meet Mare (Mary Jane Gibson) at a rather interesting time in her life. Due to an overwhelming influx of clients, she finds herself forced to open up her private and meticulously managed universe of lonely voices to her first hired employee, Lorraine Peas (Lauren Currie Lewis). Simultaneously, Mare’s sister Parry (Meredith Holzman), a successful TV host who specializes in fixing people’s problems in 30-minute episodes, has hunted her down in an attempt to convince her to undergo a hand transplant (on the air, of course). But the greatest disruption in Mare’s painstakingly routine existence (and we learn that she has all the nuances of never leaving the house and being handless all figured out) is that she starts to lose herself in fantasy of her own when a client who only breathes into the phone starts calling regularly.

With the premise of Fantasy Artists, Caldwell sets himself up to brilliantly explore the concept of “fantasy” and how, often times, fantasy is (and should remain) irreconcilable with reality. Through Mare’s training sessions with the eager and bright-eyed Lorraine, which Gibson delivers with the authority and mercilessness of a drill sergeant, we learn that her approach to her job requires her to drown her own feelings and fantasies (punctuated by her repeated mantra, “I’m nothing, I don’t matter”) until she becomes a blank slate, a fleshy robot through which her clients explore the pleasures they are too afraid to admit they want in their real lives. As Mare begins to break her golden rule (without at first realizing it) with her heavy-breathing client who presents himself as a blank-slate of his own, it becomes clear that her chosen profession is connected to her disability in a deep and complex manner and she’s not nearly as content as she claims to be. Fantasy and disability become inextricably entangled and, thankfully, the show leaves a lot of our questions explored but unanswered — it’s a great conversation starter.

The cast is strong in bringing to life a story that is very funny, yet unrelentingly undercut with the bitter realities of life. Gibson is excellent as Mare, whose strength and fragility are in a constant teeter-totter. Gibson’s performance shines brightest during a demonstration of her work for her sister, as she channels her defiance for Parry into a hysterical and frenetic phone sex session with a caller. Miguel Govea also delivers a stand-out performance as Shorty, the nearly deaf male housecleaner Parry hires on Mare's behalf.

Fantasy Artists, with its sweet blend of humor, sadness, and profundity, certainly deserves to be a hot ticket in the Fringe.