Written and Directed by Rachael Dease 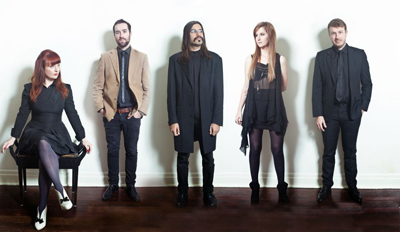 The cast of CITY OF SHADOWS.

BOTTOM LINE: City of Shadows has no plot and no characters; instead it offers gorgeous music, a look into the past, and a dark, yet compassionate view of humanity.

Surely one of the simplest productions at this year’s Fringe, City of Shadows is also likely to be among the grimmest and the most moving. Combining photography, video and music, it creates a haunting atmosphere that’s hard to resist. You may not know exactly what you’re feeling, but you’ll be feeling something.

Composer, director and vocalist Rachael Dease and her fellow musicians previously presented City of Shadows at the inaugural FringeWorld festival in Perth, Australia, winning awards and a cash prize that financed their trip to New York. Its subject matter is both specifically Australian and universal, both a trip back in time and extremely contemporary. As Dease sings and a string quartet plays, images of crime and death fade in and out on a video screen. They are mug shots and crime scene photographs taken by the Sydney police force in the 1920s, and they display both the horror and the banality of violence.

The suspects, both male and female and wearing the suits and hats that were part of daily dress in the period, stare glumly or blankly at the camera; the victims lie, variously, face down on a muddy beach, covered in blood in their beds, or curled up awkwardly in a bathtub. Sometimes we see an empty room looking more or less normal except for the bloodstain on the carpet or door; sometimes we see a space that looks as if a hurricane, not a person, tore through it. In the 21st century, we are all used to seeing images of this kind, both real and fictional, on film, TV and computer screens, but the “antique” aura of these 90-year-old pictures somehow makes them seem strange and even shocking to our jaded eyes.

Dease’s music is by turns eerie, poignant, and even warm, and the level of musicianship among the company is excellent. City of Shadows is divided into nine parts, each one a song (lyrics written by Dease for all except one, which borrows from Federico Garcia Lorca, another poet fascinated by death). There is no story, per se, just a series of images of the deceased, the killers, their neighbors and their neighborhoods. Even for a piece that intends to be plotless, Shadows is extremely abstract. At times the images on the screen seem to be building to something, only to frustrate any expectations you might have developed. Whether it requires more shape or a more pointed message is up to the viewer/listener to decide: is the senselessness of violence best expressed through story, or through sensation? City of Shadows is ultimately an enigma, much like the act of murder itself.