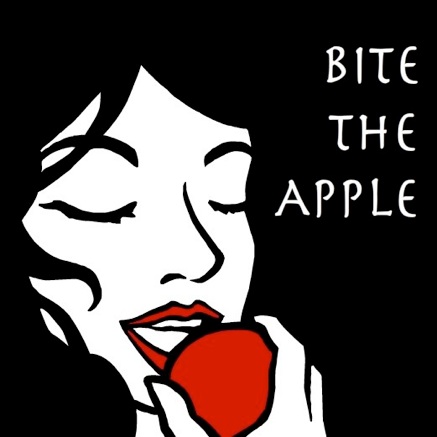 BOTTOM LINE: Bite the Apple is a well-done production that meanders through the existential difficulties of fairy tale characters.

Linda Manning's new play Bite the Apple draws inspiration from the characters of popular fairytales and explores the well-worn ground of 'after Happily Ever After.' After twenty years, Cinderella's marriage has lost its spark. Little Red prowls parking lots looking for the wolf who got away, Snow White is neurotically obsessed with being the perfect mom, and Gretel has devoted her life to saving Hansel.

Directed by Katherine M. Carter, the show begins in a very realistic world at approximately the present time and slowly descends into abstraction as each scene introduces a new character and a more figurative environment. We end up where we began, though, snapped back into the present reality.

The show gives the impression of a primarily feminist play, but there remains a strong preoccupation with each character's life as it relates to the man she chose. The exception to this being Rapunzel, a woman who was once a talented architect but is now in the throws of a mental breakdown, living alone in a disordered apartment above her best friend Gretel.

Bite the Apple stars Amy Young as Red, Diana Henry as Cinderella, Annette Arnold as Snow White, Jessica Arinella as Briar Rose, Linda Manning as Rapunzel, and Diane Zambrotta as Gretel. The ensemble of actresses are remarkable, particularly the evocative and nuanced performance by Manning. This overarching cast success parallels a remarkable design cohesion, both of which speak for Carter's superior abilities as a director. Particularly strong are Carter's uses of lighting and space to create wildly varying locations and to create clear transitions between. Caitlin Cisek's costumes are wonderfully specific, original, and creative, but Sheryl Liu's sculptured set piece, the most abstract element of the design, was beyond my recognition.

Bite the Apple is a smart script with intricate dialogue and beautiful language. The production serves the varying realities of the script, and the cast are remarkably adept with both the rich language and deep emotions of the characters. Some audience may struggle to follow the winding narrative, particularly to its full 80 minute length, but even someone who does not enjoy the entirety of the play with find moments to appreciate in this intelligent, tasteful production.

(Bite the Apple plays at the New Ohio Theatre, 154 Christopher Street, through August 18, 2012. Remaining performances are August 18th at 8PM. Tickets are $15 in advance and $18 at the door. To purchase tickets visit fringenyc.org. For more show info visit theothermirrortheatre.com.)