Yeast Nation (the triumph of life) 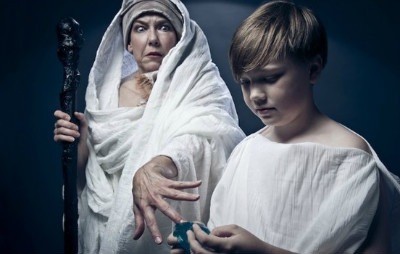 BOTTOM LINE: Yeast Nation is a fun, outrageous musical from the creators of Urinetown. It's THE show in this year's Fringe.

With music and lyrics by Mark Hollmann and book, lyrics, and direction by Greg Kotis, the duo who brought us Urinetown are back this year with their new musical Yeast Nation starring Harriett Harris. Where Urinetown showed audiences a glimpse of a not-so-distant future where water is running out, Yeast Nation takes its epic queue in the opposite direction. At the beginning of time, the Yeasts are the first living creatures on Earth, and years of procreation and feasting have led to a food shortage. Throw in the onset of the new emotion “love” and a courtly struggle for power, and you’ve got a musical allegory of primordial proportions.

Being in the audience on opening night, I was reinvigorated for theatre and for the Fringe Festival at large. The house was packed with industry professionals and friends of the production, and the overwhelming energy was enthusiasm for something new, and an outpouring of support for artists taking a risk. It was the old saying, "I'm up here playing for all my friends" come to life. Last night, everyone was a friend of Yeast Nation, and we were all hopeful and energized for what could be.

Obviously with its star creative team and Tony-winning headliner, Yeast Nation isn’t your average Fringe show, but the design is refreshingly clean and complete, allowing audiences for once to forget about the restrictions of festival production. K.J. Hardy’s spectacular, dynamic lighting, Adam Koch’s neat, nautical set, the simple, illustrative costumes by David Kaley, and Alex Ritter’s seamless sound design demonstrate the professional, productive collaboration Kotis must have shared with the creative team. It reminds us what can be accomplished in a festival, and gives me hope that other shows will overcome budget, space, and schedule to accomplish this same level of production.

And within this well-drawn world, Kotis and choreograpgher Wendy Seyb are able to execute elegant, energizing stage pictures and movement for the outstanding, hilarious cast of seasoned comedic actors.

The witty, outlandish script comes to life through the ensemble — a diverse and talented cast ranging from a bumbling Rick Crom to the sassy and snappy Rheaume Crenshaw. Harriet Harris leads the cast, narrating, speculating, and delivering her signature outrageous comedy with both barrels. Erik Altemus provides the ideal hero with his rocking vocals, natural charm, and stunning, all-American good looks. Kimiko Glenn plays the primitive, animalistic New One with verve. And whenever he was on stage, I couldn’t help watching Antwayn Harper who was giving it from opening number to final blackout. But the show stops for Joy Suprano, who is revelation as the scheming second person Jan the Sly. Suprano breaks out several songs into Act I, wowing with her powerful voice and comic instinct, and for the rest of show she dazzles with one-liners, vocal growls, and the occasional finger gun dancing. By the end, I couldn’t help wanting Suprano to thwart the hero.

The music of Yeast Nation is exciting and energetic, with the catchy tunes, inspiring ballads, and powerful choral numbers we expect (hope for) from Kotis and Hollmann. The cast’s voices soar and the so do the hearts of the audience. That’s right, I saw some people wiping tears in that dark theatre.

Recent years have seen a dearth of professional shows in Fringe, and thank the theatre gods, thank the salts, Yeast Nation is here to raise the bar back up. It’s apparently sold out for all five shows, but I wouldn’t worry if you can’t get a ticket. This isn’t the last we’ll see of this fun, touching musical.

(Yeast Nation plays at The Ellen Stewart Theatre at LaMaMa 66-68 East 4th Street, through August 25, 2011. Remaining performances are Thursday, August 18th at 5:15PM; Sunday, August 21st at 2:15PM; Monday, August 22nd at 8:15PM; and Thursday, August 25th at 2PM, but sadly the show is sold out so tickets might be hard to come by. Tickets are $15 and are available at fringenyc.org. For more show info visit yeastnation.com. For more info about FringeNYC visit fringnyc.org.)