What the Sparrow Said 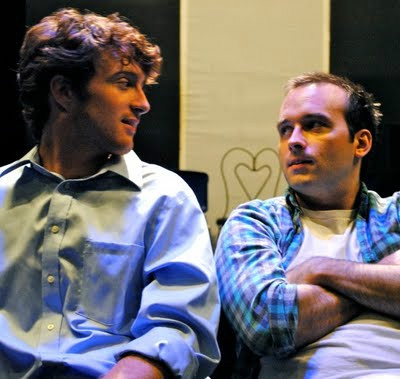 What the Sparrow Said by Danny Mitarotondo, produced by The Common Tongue, and now playing at Teatro LATEA as part of the 2011 Fringe Festival, is an outstanding example of what the Fringe Festival is supposed to be all about. It is a wonderful example of a new playwright’s pushing the limits of his craft to produce a work that transcends traditional theatrical boundaries and that, notwithstanding its limitations, makes its audience sit up and take notice – if only to say “I was there when he first burst upon the scene.”  For there is little doubt in my mind that Mitarotondo is a major new talent from whom we’re likely to be hearing much more in the years ahead.

What the Sparrow Said doesn’t really break any major new ground in a substantive sense: it is simply a variation on the oft-told story of two brothers who meet after several years of estrangement at their mother’s deathbed. But it does break new ground in form and structure: it is a non-linear, right-brained exposition of the relationships among a number of tangentially related characters which forces its audience to view it from a variety of perspectives (in much the way that Braque or Picasso may initially have engaged their audiences with their visual arts).

The play’s overarching theme is the fractional, fractal, fractious and refracted nature of human relationships. That is, the degrees to which we all may be perceived as composites of those whom we resemble, and the sense in which we filter our impressions of others through our recollections of still earlier encounters.  All six actors in this production are up to the tasks set before them – Brenda Currin as Hannah, Lila Dupree as Amelia, Matthew Michael Harley as Dan, Kevin Mannering as Blaze, Ruby Ruiz as Nursie, and most especially Heather Oakley as Cynthia. And director Jenna Worsham elicited the very best from them.

One caveat: while I very much enjoyed this production, not everyone will.  If your tastes run more toward the theatrically traditional, including temporal linearity with plots and characters developing along reasonably predictable lines, this might not be the play for you. But if you're like me, and intrigued by theatrical risk-taking experiments, then What the Sparrow Said is one play you do not want to miss.

(What the Sparrow Said plays at CSV Flamboyan, 107 Suffolk Street, #312, through August 26, 2011. Remaining performances are Thursday, August 25th at 6:45PM; and Friday, August 26th at 3:30PM. Tickets are $15 and are available at fringenyc.org. For more show info visit tctnyc.org. For more info about FringeNYC visit fringnyc.org.)