Off Off Broadway, Play
Runs through 8.20.11
The Living Theatre, 21 Clinton Street 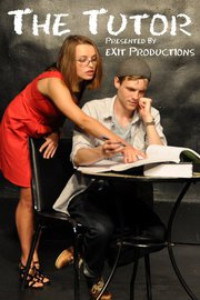 Olivia Gilliatt and Ian Way in THE TUTOR.

BOTTOM LINE: The Tutor is a contemporary, creepy comidrama about sex, education, and power. Sure to be part of the creme de la Fringe's creme.

Kate Mulley’s The Tutor takes a darkly comic look at the different ways we commoditize ourselves and at the balance of power across gender in different male/ female relationships. Meredith (Olivia Gilliatt) has put aside her Ivy League education to work as an SAT prep tutor by day and an underwear entrepreneur by night, but her fiancé Josh (Valence Thomas) only knows about the first gig. Meanwhile things get complicated between Meredith and a family that employs her; she becomes too familiar with both the teenage boy she is tutoring (Ian Way) while his father becomes too familiar with her (Bradford Cover, Broadway’s A Thousand Clowns). She gets an ear full of marital problems from his mother (Valerie Lonigro).

Directed by Ben Gougeon and Doug Spagnola with projections designed by the former, The Tutor is a clever, intricate investigation of people, power, and profit. Mulley parallels selling your intelligence against selling your sexuality, and also explores the dynamic of marital relations, the teacher/ student relationship, and the struggle for control in an imbalanced business relationship. Gougeon and Spagnola employ an ambitious use of real-time and prepared media throughout the play to illuminate situations and to support and explore the internet-heavy plot.

There are beautiful moments in The Tutor, including a heartbreaking speech questioning how nostalgia will be effected for the text message teens. And the final moment of the play is a brilliant catch, snapping the script to a tight, unsettling close.

This is a smart, quick, and casually complex play which eXit Productions brings to life with grace and invention. Mulley unites the wit and worries of a generation, and Gougeon and Spagnola bring an internet drama to life on stage. This is certain to be one of the strongest, most thoughtful plays in the festival.

(The Tutor plays at The Living Theatre, 21 Clinton Street, through August 20, 2011. Remaining performances are Sunday, August 14th at 12PM; Monday, August 15th at 10PM; Wednesday, August 17th at 3:45PM; Saturday, and August 20th at 4:45PM. Tickets are $15 and are available at fringenyc.org. For more show info visit thetutorplay.com. For more info about FringeNYC visit fringnyc.org.)