Off Off Broadway, Musical
Runs through 8.16.11
Bowery Poetry Club, 308 Bowery 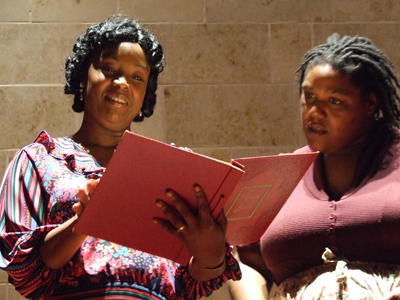 Angela Dean-Baham and Erica Richardson in THE UNSUNG DIVA.

BOTTOM LINE: An incredibly engaging and beautifully constructed look at the life of Sissieretta Jones, an African-American opera singer who rose to fame at the end of the 19th century.

Every year when I am reviewing the Fringe guide to decide what to see, one or two shows that are different from my usual theatre fare jumps out at me. There is usually a show that is a bit off the beaten path, that plays to a half empty house, that no one I know wants to join me for, but that I wind up seeing. And without fail it is this type of show that I attend that blows me off my feet and causes me to spend the rest of the festival urging others to see it. The Unsung Diva is such a show.

Angela Dean-Baham brilliantly and effortlessly brings to live the true story of Sissieretta Jones, an African American opera singer who received international fame towards the end of the 19th century only to die in poverty, a victim of the era’s racial boundaries and the lack of opportunities for black artists of the time.

We join Madam Jones in 1927 as she frantically searches through her belongings for a pair of earrings that she must sell to pay off debt. As she rummages through her things she recalls her career and experiences as "the most notable Negro singer in the world."

As juxtaposition to the classiness of Madam Jones we meet the ghost of Topsy (played by the very talented Erica Richardson), the familiar stereotypical minstrel performer who helps her tell her story as well as search for the earrings. Richardson channels the ignorant but audacious spirit of the typical minstrel performer made all the more interesting next to the refined elegance of Madam Jones. Through this mash-up of sorts, we see the divide for African American artists of the time — what they were capable of and what they were expected to be.

As she recalls her career Madam Jones treats the audience to performances of her operatic work. Dean-Baham brings her beautifully trained and thrilling operatic talents to these parts of the show, made all the more unique and special since we are witnessing it up close in a smaller venue as opposed to a larger opera hall. As an additional layer (though completely unintended) during the performance I attended one could hear the faint refrains of a Ne-Yo song playing at a neighboring bar which added an interesting comparison of the entertainment opportunities of Madam Jones's world and the present.

The Unsung Diva is a beautiful tour de force for Dean-Baham and it is expertly and subtly directed by Michael Mohammed. The Unsung Diva is the sort of show that so greatly exemplifies what theatre should strive to be: a rich narrative of compelling characters, whose very existence challenges and comments on the society and world that we live in.