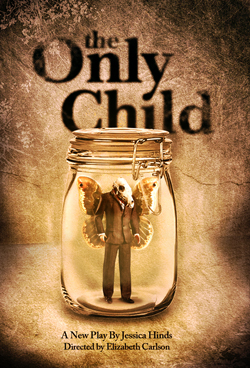 In the nature vs. nurture debate, Samuel loses on both counts. With parents like Myrna and Asher, it's no wonder he's got some emotional reckoning to deal with. The Only Child explores a dysfunctional family whose isolated peace is disturbed when the truth about their past is revealed. At their family home in a remote part of a wooded area, Myrna and Asher are forced to admit to some serious past transgressions. And these revelations are mighty fun for an audience to witness.

The Only Child takes place in three acts: the first in the (presumable) present, the second twenty years prior, and the third in the present once more. We see Myrna (Asta Hansen) and Asher (Jeff Pucillo) in two stages of their lives, and through it all they function as a team. Although they're undeniably weird, at first they seem harmless. Maybe opting for a stew-filled existance in the woods will do that to a person. Their lives seem mostly satisfying if somewhat unfulfilled, until an unwelcomed visitor, Hadley (Ben Williams), knocks on their door. With a building suspense, the story unfolds with a lingering suspicion that all will not end well.

It's clear that playwright Jessica Hinds and director Elizabeth Carlson concocted this production with care and attention to stylistic detail. The Only Child offers a world similar to our own, yet entirely distinct. And it tells a story that's both heightened and grounded, though it's often the former. There's a mysterious air a la Hitchcock, at times, and an unwavering sense that the play's journey will take you somewhere gratifyingly climactic. It's theatrically fulfilling in this way.

The play suffers from a length issue -- it's about 20 minutes too long, and those minutes unfortunately come at the very end, when everything is as it needs to be (or almost as it needs to be). The final scene is poetic and verbose, but it's often redundant, with themes heard previously and seemingly repeated for effect. There's also some nudity in this moment that doesn't seem justified, and it's also more awkward than organic (i.e. if you're the only person in the room and you're naked, you don't need a hoverhand). The Only Child shines brightest in its second act, and although it tries to pick up momentum afterward, the pacing is somewhat laborious.

Still, an excellently quirky cast and skillful direction make this suspenseful play plenty fun to watch. If you're looking for an engaging, theatrical night, The Only Child is sure to keep your attention.

(The Only Child plays at The First Floor Theatre @ La MaMa, 74A East 4th Street, through August 28, 2011. Remaining performances are Sunday, August 14th at 8:45PM; Thursday, August 18th at 5:45PM; Saturday, August 20th at 5PM; and Sunday, August 28th at 2PM. Tickets are $15 and are available at fringenyc.org. For more show info visit theonlychildtheplay.com.  For more info about FringeNYC visit fringnyc.org.)