The More Loving One 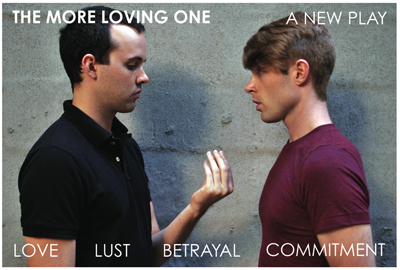 BOTTOM LINE: A new show about two couples grappling with life on a college campus.

At the start of Cory Conley’s new work The More Loving One we meet Matt (David Beck) a young yet already curmudgeonly college professor who is arguing with his more free-spirited wife Lauren (Adrianna Degirolami), who is some sort of visual artist. They argue about all sorts of superficial things — including the appropriateness of track pants — yet at the core they are reeling over Matt’s recent deposition against his friend who has been accused of a sex crime.

They are joined by their gay roommate Heinrich (Jimmy Davis) and his boyfriend of four years Henry (Preston Martin) who are also having drama of their own.

The actors turn in fine performances with Mr. Martin landing some very funny lines even though both of the couples seem slightly (perhaps intentionally) mismatched. Craig Baldwin’s direction has the characters very effortlessly and realistically moving around the apartment, which is a very ambitious set designed by Dane Laffrey. The design, which is elaborate for Fringe standards, includes a working refrigerator; a fully stocked mini-bar; and a large white canvas on which in one scene Lauren’s visual art is projected onto.

The way in which Conley lays out his story is a very interesting device in which the characters speak in very roundabout and vague terms (often using pronouns) and the details are later filled in.  I believe the device is intended to keep audiences on the edge of their seats wondering what’s happening next, which it does, but it as times a bit confusing.