THE LEGEND OFJULIE TAYMOR, or The Musical That Killed Everybody!

Off Off Broadway, Musical
Runs through 8.24.11
Bleecker Theatre, 45 Bleecker Street 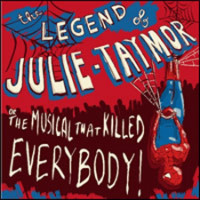 BOTTOM LINE: The Legend of Julie Taymor is a satirical Fringe musical re-imagining the recent Spiderman debacles as an epic disaster.

National news was abuzz for months in early 2011 about the struggles of the monolith Spiderman production, and gossip and rumors flew gleefully through the theatre industry. It was inevitable that someone would musicalize the madness of this real-life musical mess. Enter Travis Ferguson (book and lyrics) and Dave Ogrin (music and lyrics).

True to parady form, the names are changed to protect the shameful in the Broadway-based showtune romp, but with power-hungry visionary Julie Paymore creating her masterpiece “Spiderdude” at all costs (financially and physically), it isn’t hard to read between the lines. It reminds me of a Broadway Valley of the Dolls.

The two shortcomings of the show actually stem from its real-life roots. With such an outrageous reality as a starting point, the parody needs to be that much more extreme, and sometimes the show could have gone farther in the name of mockery, camp, and absurdity. Also, the show is very “insider.” Many of the jokes are nudges within the industry, which elicit self-assured chuckles from the theatreistas in attendance, but these jokes may be lost on a wider audience.

Still, the show is hilarious, and the audience loved it. Christopher Davis Carlisle captured the crowd in the first 16 bars of his introductory song as the schmoozey, obsessive theatre columnist Lionel Weasel and Barry Shafrin delights as Billy, the eager but overwrought fresh-faced chorus boy. Clint Carter’s joke is built in when he plays spoofy British rock star / “Spiderdude” songwriter Bruno, but he infuses the role with his charisma and vibrancy. And leading the cast as the hubristic genius Julie Paymore, Jennifer Barnhart (Avenue Q) unleashes vigor, vitriol, and unmitigated comic endurance. Barnhart is unrelentingly funny and alive from start to finish.

If it weren’t for that other musical from those Urinetown boys, The Legend of Julie Taymor would be THE show in this year’s Fringe Festival. It has all the elements: hilarity, ambition, a great cast, and a niche audience. And the sold out houses are proving its standing as a festival favorite.

(THE LEGEND OF JULIE TAYMOR, or The Musical That Killed Everybody! plays at the Bleecker Theatre, 45 Bleecker Street, through August 24, 2011. Remaining performances are Sunday, August 21st at 3PM; and Wednesday, August 24th at 7PM. Tickets are $15 and are available at fringenyc.org. For more show info visit legendofjulie.com. For more info about FringeNYC visit fringnyc.org.)