The F*cking World According to Molly

Off Off Broadway, Solo Show
Runs through 8.28.11
The Players Theatre, 115 MacDougal Street 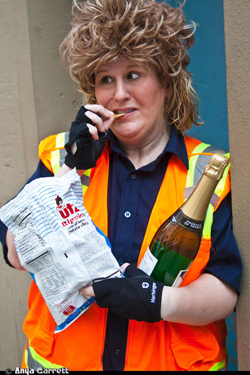 In The F*cking World According to Molly, Andrea Alton brings her outrageous foul-mouthed alter-ego Molly Equality Dykeman to the stage for an hour long rendezvous complete with poetry, dancing, storytelling, and all the sexual references a girl could want. I’ve admittedly seen Alton’s act before, and am always entertained by the butch zaniness that Molly brings. For this production, however, a more particular narrative threads the story, giving less of a stand-up comedy vibe with more emphasis on who Molly Equality Dykeman actually is. And this makes for a wholly satisfying evening.

Molly is a budding poet (put the emphasis on the second syllable of “poet”) and this production is framed around her first semi-professional poetry reading at an East Village bar. A recent break-up has left Molly heartsick and angry, and the event will hopefully also give her access to a new group of ladies. From poems about female sexual organs, to poems about doing things to female sexual organs, to blatant flirting with women in the audience, it’s pretty obvious what’s on Molly’s mind. And she isn’t shy about telling you just how much she loves sex.

Alton’s show is hers and hers alone, and she give total commitment to the wackiness that is Molly Equality Dykeman. She runs with opportunities to improv, and she never waivers in her embodiment of Molly. Alton’s physicality is awesome, down to this ridiculous facial contortion that Molly sometimes assumes.

Director Mark Finley does a commendable job filling out the production and leaving no comedic stone unturned (how does she fit so much in her reflective vest pockets?) while unifying the jokes into a cohesive theatrical experience. Finley always keeps the show’s tone in check, so it feels sincere when it gets to a more substantial place as Molly talks about defending the kids at her school who get bullied.

I’m sure Molly’s brash, overtly sexual, self-medicated joie de vie is not for everyone, particularly those adverse to R-rated jokes. But for those who enjoy ostentatious comedy and find humor in outrageous stereotypes (at no one’s expense, of course), then The F*cking World According to Molly is a must-see.

(The F*cking World According to Molly plays at The Players Theatre, 115 MacDougal Street, through August 28, 2011. Remaining performances are Friday, August 19th at 6PM; Saturday, August 20th at 9:15PM; Thursday, August 25th at 2PM; Sunday, August 28th at 4:15PM. Tickets are $15 and are available at fringenyc.org. For more show info visit mollyequalitydykeman.com. For more info about FringeNYC visit fringnyc.org.)