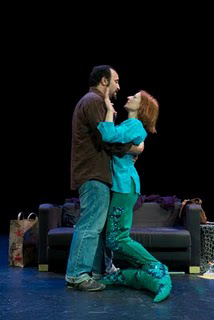 Dawn McGee and Vinnie Penna in THE AVERAGE-SIZED MERMAID.

BOTTOM LINE: The Average-Sized Mermaid is a wonderfully written adult fairy tale about keeping your dignity through the hardships of love.

In The Average-Sized Mermaid, three friends rally around Miriam (Dawn McGee), who has just been dumped by her douchebag boyfriend for someone else. Not only is Miriam grappling with heartache, but she has also undergone a rare physical transformation in the wake of her grief: she has literally grown a mermaid tail. Miriam has a literature background, and while she loves children’s lit, she loathes the Hans Christian Andersen story of The Little Mermaid because of its misogynistic ideals, the implication of the “little” lead character, and blatant message of female oppression.  But after reading the story to her class, she finds herself in the lead role.

Why she has grown this tail is unclear, but it doesn’t seem medically problematic to anyone and a doctor is never consulted. Miriam moves in with her friend and principal, Louis (Vinnie Penna), who has a conveniently handicap accessible house, as his recently deceased wife was wheelchair bound.  Louis lets Miriam borrow his wife’s wheelchair, and Miriam begins to adjust to her new appendage. Sure, she has to give up dancing and sex, but she can serve as an example to women everywhere that what’s between your legs doesn’t have to be your most important contribution to the world. A feminism movement grows from Miriam’s example, and mermaid-ness becomes something to aspire to. though no one’s really sure how to become one.

Miriam embraces her new raison d'être, that is, until she develops feelings for Louis and realizes that she can’t have a relationship in her present state.

McGee is absolutely charming as Miriam: with great comic timing and the utmost truth she assumes the role of the confident feminist with something to say, while maintaining a dejected vulnerability that she just can’t shake. Penna is a pleasant voice of reason and a charming yin to McGee’s mermaid yang. Unfortunately though, the production doesn’t hold a consistent reality that lets you indulge in the material; rather, it plays to its jokes, constantly references its use of metaphor, and is sometimes unnecessarily silly (i.e. bad drag for no reason). At its heart, The Average-Sized Mermaid is a delightful, modern fairy tale, and it is at its best when it lets its fantastical and sincere world drive the story.

(The Average-Sized Mermaid plays at the Connelly Theater, 220 East 4th Street, between Avenue A and Avenue B, through August 27, 2011. Remaining performances are Monday, August 15th at 9:30PM; Thursday, August 25th at 6PM; Friday, August 26th at 9:15PM; and Saturday, August 27th at 1PM. Tickets are $15 and are available at fringenyc.org. For more show info visit avgmermaid.blogspot.com. For more info about FringeNYC visit fringnyc.org.)