The Apartment: A Play With Four Sides 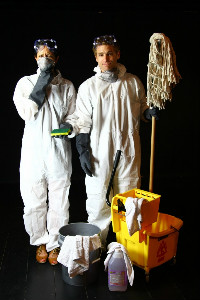 Sarah Nina Hayon and Vayu O'Donnell in THE APARTMENT.

BOTTOM LINE: Four romantic stories that unfold in the same apartment over the course of a now-historic decade.

The tie that binds the four stories collectively known as The Apartment is, well, the apartment in which they all take place. This play, which is written collectively by Sorrell Barnard, Melissa Moran, Lindsay Joy Murphy and David Scott, depicts the diversity of events that can unfold in one apartment over the course of a decade and is an ode to the always in-flux nature of New York City.

Each story that unfolds is roughly rooted in a tale of heterosexual romance. In the first scene, Sarah (Christina Broccolini) and Tim (Chris Davis) delve deeper than expected when the blackout of 2003 interrupts their first date. In the second scene, Peter (Christopher Johnstone) and Kristina (Mara Lalli) try to find common ground that will stabilize their inherently casual relationship. The third scene depicts Matt (Victor J. Wisehart) and Nahid (Shannon Amiry) trying to convince Tim to rent them the apartment. And, in the final scene, Jerry (Vayu O’Donnell) confesses his longstanding love for Rita (Sarah Nina Hayon) as they clean up a bloody crime scene in the apartment.

At it’s best, The Apartment embodies the oscillation between blissful excitement and neurotic exhaustion that is arguably the essence of the New York experience. The show also presents an effective sense of budding nostalgia for the first decade of the new millennium (affectionately referred to by the writers as “the Noughties” in the program). By referencing 9/11, the great blackout, street view on Google Maps, etc. The Apartment works as a record of what can now be seen as a particularly fascinating decade in American history. When Maroon 5’s “Sunday Morning” played at the end of the first act, it took me a moment to realize this was a conscious effort to capture a time and not just an 8-years-too-late choice of pop music.

Overall The Apartment is clever and focused, and delivered with passionate performances. Though there are moments when it fails to be believable and may, overall, be too consistently “romcom” for some theatre audiences, The Apartment is sure to strike a chord with anyone who often dwells on the uniqueness of New York City and the effect it has on those who choose to inhabit it.