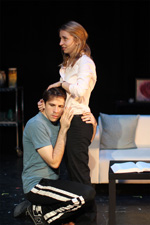 BOTTOM LINE:  Babies are scary. Especially when you're in your mid-twenties and living in the city with your autistic sister.

Facing the impending birth of a child is scary enough for a first-time parent, but couple that with parents-to-be who live in New York, where the average relationship/reproduction timeline is severely stinted, and a tendency towards autism in the family, and it can be downright terrifying. Scared of Sarah follows Lily (Carolyn Daucher) and Sam (Nate Grams), a mid-twenties couple who become unintentionally pregnant. As they come to terms with the idea of parenthood, Lily’s autistic sister Sarah (Brenna Palughi) comes to live with them, bringing to front a rush of fears about all of the things that could go wrong with their baby.

At times the show feels as if it was created in two separate worlds. The material dealing directly with Sarah’s autism is fascinating, captivating and uncomfortable, in a good way, whereas the moments revolving around the nuclear family often feel irrelevant and dated. There is one scene in particular where the fear of the baby leads to a brief discussion about the possibility of abortion; Lily says several times something very close to the effect of “It’s my body, it’s my decision." Be it true or not, it sounds like a 1995 pro-choice rally cry.

Although the structure of the play occasionally feels a little flat, the writing and creation of the character Sarah is spot on. Playwright Laura Brienza creates a fascinating opportunity for the audience to observe an immensely believable portrayal of autism. Sarah’s character is written to be a moderately accessible conundrum.  She frustrates and endears all at the same time. Additionally, Brenna Palughi (who in the interest of full disclosure I should mention I have worked with before) gives a stunning performance. Her energy is relentless and she approaches the role in a manner that is both fearless in its depth of character and compassionate towards the disability, not always an easy balance. The rest of the cast also creates a realistic environment well. Daucher and Grams have a believable, easy chemistry as a couple; the relationship they create on stage makes it very easy to slip into the world of the play and get lost for a bit.

(Scared of Sarah plays at The First Floor Theatre at La MaMa, 74A East 4th street, through August 17, 2011. Remaining performances are Wednesday August 17 at 7:45PM. Tickets are $15 and are available at fringenyc.org. For more show info visit scaredofsarahplay.com. For more info about FringeNYC visit fringnyc.org.)