Off Off Broadway, Play
Runs through 8.27.11
The Living Theatre, 21 Clinton Street 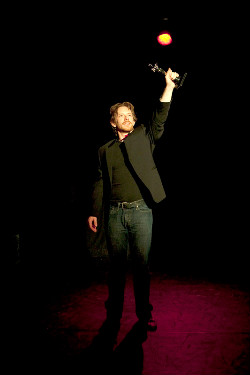 BOTTOM LINE: A well-staged and interesting exploration of a screenwriter who lies about his HIV status to advance his career.

Second only to the struggle of coming out, the HIV/AIDS epidemic and the challenge of living with the disease has dominated the LGBT theatre scene more so than any other topic during the past three decades. And so it would seem that we on a familiar footing with Infectious Opportunity, a new play that revolves around the screenwriter of an acclaimed film supposedly based on his own experiences living with HIV. The snag which sets this work apart from the pack is that screenwriter Wes Farley — despite claiming the opposite — is in fact not HIV-positive.

A work in which the protagonist fakes for his own personal betterment a disease that has decimated and destroyed large swaths of communities (especially in the arts) and continues to rage, is a risky and even offensive proposal, but James Comtois’s impressive script pulls it off. Infectious Opportunity is not just a commentary on the Hollywood publicity machine or on how our society reacts to HIV-positive people but it is a complex study of how one artist struggles with his decision to deceive the public.

Taking on the character of Wes, David Ian Lee gives an emotionally complex and mostly riveting performance, a difficult feat given the character’s questionable ethics and flawed decisions. The work alternates between the present where Wes is torn up by his deception but feels powerless to stop it, and the past where he relives the many lost opportunities to end this lie. In a very interesting framing, he is joined by Josie (the pitch-perfect Jessi Gotta) who effortlessly wears many hats. She is his imaginary friend and conscience, as well as a real recovering drug addict who Wes’s film A Shoulder to Cry On is based on.

Gotta and Lee are joined by a terrific supporting cast who play many different eclectic roles as the story progresses. This includes Rebecca Comtois who stands out as a student in love with Wes; Ingrid Nordstrom, who plays a wide array of peculiar characters effortlessly; Matthew Trumbull, a mentor to and later a colleague of Wes's; and Daryl Lathon, who gives a spirited performance as Wes’s agent Brent.

The work moves through many different settings at a very brisk pace under Pete Boisvert’s direction and an ingenious set design by Rebecca Comtois and Ben VandenBoom.

Based on the premise alone Infectious Opportunity is the sort of work that one could easily assume would be offensive or derogatory, but it is not at all. It is an enjoyable, thought-provoking play brought to life by a very talented team.