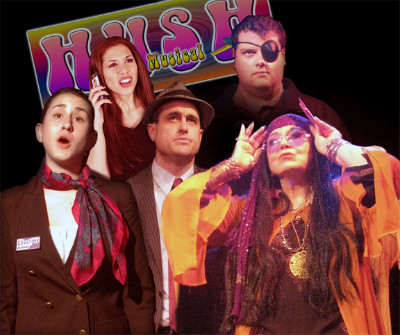 BOTTOM LINE: A cheerful but slight musical set in an airport VIP lounge.

Now playing at Le Poisson Rouge as part of the 2011 Fringe Festival, Hush the Musical is set in the VIP Lounge at LaGuardia Airport during a blinding snowstorm which has grounded all flights. It is there that we meet Othello Salviati (Seth Blum) who, having been cuckolded by his wife Vittoria (Diana Falzone) is ambivalently conspiring with Nick (Tommy J. Dose), to arrange her murder. Also in attendance is Georgia, a pesky New Age meditation instructor played by Emelise Aleandri (who is also the play’s librettist and the artistic director of The Frizzi & Lazzi Theatre Company which, together with Charles Mandracchia who co-conceived, composed and directed the work, was responsible for the overall production). The cast also includes a rather bereft stewardess (Madelyn Schwartz) and assorted other airline passengers (Blair Anderson, Emily Billig, Jim Roumeles and Isabel Cristina Orbando).

It all makes for a somewhat amusing 75 minutes of entertainment and I left the theatre with a smile on my face. But while the score and the lyrics were serviceable, they were scarcely memorable and I didn’t find myself humming any of the tunes at the end of the show. Musical direction and orchestrations were provided by Mitch Marcus who also played the piano; he was accompanied by Alisa Horn on cello and Yuiko Kamakari on violin. All three exhibited exceptional musical talent and can’t be faulted for the score’s shortcomings.

All five of the leads (Blum, Falzone, Dose, Aleandri and Schwartz) performed well but the one who came closest to stealing the show was Dose, who, as a homesick and somewhat inept Eastern European hitman, was responsible for many of the show’s comedic high points. His performance is the number one reason to see this show. The rest of the show’s cast (Anderson, Billig, Roumeles and Cristina) seemed to be there more as filler than anything else and, through no fault of their own, it wouldn’t have mattered much one way or the other had they been left out.