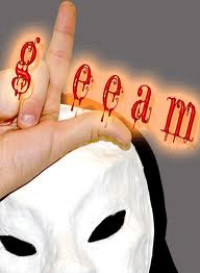 BOTTOM LINE: Gleeam is a Fringe musical spoof with moments of camp glory.

Fringe perennial The Landless Theatre is back this year with Gleeam, a parody musical mash-up of Glee and Scream brought to the stage by director Emily Ann Jablonski. Written by Andrew Lloyd Baughman with lyrics by Phil Close and additional arrangements by Charles W. Johnson, Gleeam is a fifty-minute spoofsical with a cast of familiar but tattered characters in recognizable but musicalized situations. Oh, and there’s some burlesque stripping thrown in for good measure.

While Gleeam remains rough around the edges, the camp comedy, drag, and mockery of the piece wins laughs in the audience. Sometimes the show falls into the spoof trap of blurring the line between what is a joke and what just isn’t working, but the musical has two successes in “Gay Enough for Love,” a beautifully sung duet between Jase Parker and Harv Lester, and Justine Hall’s showstopping rendition of “Black Don’t Crack.” In fact, Justine Hall’s “Black Don’t Crack” is such a hit, it makes up for any other shortcomings. I’m still humming it today. They should sell it as a single on iTunes.

Sometimes the plot is difficult to follow, and vocals and choreography could have used more rehearsal to tighten and clean, but I have no doubt that Gleeam could continue on from Fringe and develop into a very fun musical.