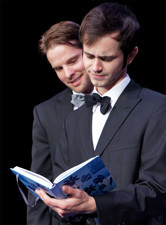 BOTTOM LINE: Elysian Fields tells the imagined stories of Allan, Sebastian, and Brick, three gays whose offstage deaths are the catalysts for the conflicts in A Streetcar Named Desire, Suddenly Last Summer, and Cat on a Hot Tin Roof.

It’s such a fantastic idea. Without Allan, Blanche’s sensitive poet husband who killed himself, there would be no Streetcar Named Desire. Catharine would not have been summoned to Aunt Violet’s garden in Suddenly Last Summer if Sebastian hadn’t been murdered. And it’s his guilt and grief over Skipper’s death that causes Brick’s malaise in Cat on a Hot Tin Roof. Each of these characters is explored in a scene around the crucial moment preceding his death. And although there is an expectation with this play that the audience is informed about the three source scripts, the show could be appreciated without knowing the full stories.

The strongest part of the play is when Phillips takes liberties with the back story, inventing his own circumstances and writing a new play around the characters and given outcome set forth by Williams. This is one of the reasons the Sebastian and Skipper vignettes are more interesting than Allan’s.

The greatest opportunity in this script is the connection between the three men. In Phillips’s Elysian Fields, each gay phantom has a dream, idea, or hope for a fantasy life where he has two brothers: the other two characters. It’s an interesting connection that allows for an exploration of the value of these characters as people, despite the fact that they weren’t originally important enough for the page. As further productions bring more development to the script, this will be an exciting element to watch grow.

The casting is perfect with exactly the right type for each role. The whole ensemble of actors is remarkably physically invested and the dialect is overall handled well. Scott Hinson steals the show as Sebastian, and Amanda Kruger brings charm and life to the challenge of playing Blanche, Catharine, and Maggie. And having one actress play all three of these iconic women helps to pale their roles so that the gays can be the center.

Elysian Field is a stellar idea. The script is filled by beautiful moments, and play has a wonderful, uplifting, pro-gay message.