Off Off Broadway, Play
Runs through 8.27.11
Dixon Place, 161A Chrystie Street 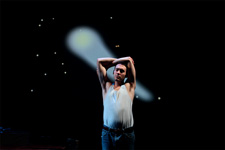 Cow Play is a simple story about two boys, a girl, and a farm -- and also a cow and a dead sister. Brothers Jed (Will Turner) and Mark (Alex Kramer) are the only two surviving members of a dairy farm family. Jed is quiet, brooding and steady and the responsibility of maintaining the farm falls upon his shoulders. Mark, on the other hand, is a whirlwind of academic whimsy who abandons the farm in pursuit of a life in New York City. The thing about Cow Play, however, is that the plot is only a small part of the experience, the real joy in play is how the story is told.

Director Charlie Polinger crafts a radiant mosaic of theatrical angles by encompassing a slew of methods to tell the story. Scenes overlap with one another, vaguely relevant monologues are performed, stop motion animation is used, a cow moos and is subsequently translated, movement and non-linear methods are intertwined. While using so many devices often isolates me from theater, as implemented by Polinger, they work to enhance, clarify and deepen the tale.

The cast keeps the pace moving and the audience engaged for the duration of the show. There are numerous symbolic through-lines in the piece, most notably regarding the consistency and scope of time, and all three cast members are able to internalize these nuances into their performances. Turner plays Jed as rustic and unembellished without making him feel simple. Kramer, as Alex, is a tornado of information, sentiment and relief. Willa Fitzgerald, as Mark’s girlfriend Julie, shows a remarkable range of character.

At two hours the play runs slightly long. There is a little too much focus on the relationship between Mark and Julie which feels like the only stagnant element of the show. There’s not much depth to the relationship and although you have to listen to them say “I love you” to each other countless times, there isn’t much to make you believe it. Additionally, Julie’s character, a wide eyed aspiring actress driven to depression through the harsh realities of the New York industry, through well-acted, is a bit of a tired cliché on the New York stage.

All in all, Cow Play should be on any Fringe lovers must-see list. It takes an easily accessible story and relays it through an intriguing yet clarifying lens.

(Cow Play plays at Dixon Place, 161A Chrystie Street, through August 27, 2011. Remaining performances are Wednesday, August 24th at 8:30PM; and Saturday, August 27th at 9PM. Tickets are $15 and are available at fringenyc.org. For more show info visit lessthanrent.org. For more info about FringeNYC visit fringnyc.org.)