Courtney and Kathleen: A Riot Act 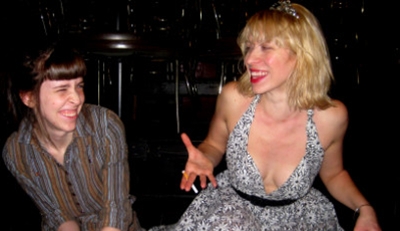 Emilie Soffe and Heather Lee Harper in COURTNEY AND KATHLEEN.

BOTTOM LINE: A riveting, cleverly staged work that explores the riot grrrl movement, feminism’s third wave, and the real life story of the rivalry between Courtney Love and Kathleen Hanna.

In the early 1990s, a growing grunge and punk scene in Olympia, Washington helped springboard another movement in music, the riot grrrl scene. This movement helped push an inordinate number of female musicians onto the concert stage and eventually into the media. It was about more than music though, it also was highly political, helping to bring about a third wave of feminism.

At the forefront of this movement were two women: Kathleen Hanna of Bikini Kill and Courtney Love of Hole. The two were also inextricably linked through their close relationships to Nirvana frontman Kurt Cobain; Hanna was his close friend and Love was his eventual wife and mother of his child. While the two were initially friendly to one another, the friendship fell into a bitter rivalry culminating in Love physically assaulting Hanna. Although playwright and director Liz Thaler fills in the gaps in the story with her own imagination, Courtney and Kathleen, for the most part, sticks closely to actual the story as documented by the media.

Courtney (Heather Lee Harper, bearing a strikingly close resemblance to Love) and Kathleen (Emilie Soffe) meet one fateful day in 1991 because Kathleen is Kurt’s close friend, and Courtney has a crush on him and is in hot pursuit. The two cross paths again over the years and seem to be on friendly terms despite Courtney’s penchant for yelling and getting angry at the drop of a hat. They bond the day that Courtney calls out Kathleen’s make-out partner for being a sexist jerk and the two realize they have similarities in terms of their feminist beliefs. Whereas Kathleen’s feminist view is fully articulated and idealized, Courtney instead feels anger towards a male dominated music industry and society and the fact she has to deal with traumas such as being sexually assaulted by members of the audience at her own show.

While Kathleen is, by far, made out to be the more likable of the two she spends much of the play earnestly discussing third wave feminist politics and her idealism goes a little too far at times. (Before beginning to make a make out with a guy she asks him “Do you believe in the radical possibilities of pleasure?” referencing one her band's key songs.) Nonetheless, her discussions give light to the historical importance of the riot grrrl movement and feminism’s third wave. Thanks in part to playwright Liz Thaler and the performers, the political discussions never grow dull and every moment of the show remains completely riveting, perhaps due in part to the characters’ discussions of their personal struggles.

The two fall apart for good around the time of Kurt Cobain’s suicide when Courtney Love punches Kathleen in the face, allegedly over a remark regarding her lack of skills as a mother. Thaler cleverly chooses to stage a real statement given to the police regarding the real life incident, including such details as Courtney screaming “I’m more feminist than you are,” as she punches her in the face and flings candy at her. (A copy of the legal statement is cleverly projected on the back wall.) In the end, the play imagines a resolution never seen in real life: Kathleen and Courtney musically collaborating over their shared politics.

The play however, is not simply a story of two rivals, it also explores the politics behind the riot grrrl movement, gender politics within the music industry, and the increasing visibility of the GLBT community as part of this movement. The cast shines in their roles, with Heather Lee Harper fully embodying Courtney with help from historically accurate costuming. Emilie Soffe lights up the stage with enigmatic energy, fully communicating Kathleen’s relentless enthusiasm and idealism. Alex Shaw also shows great versatility in his performance of multiple roles during the course of the play.

Courtney and Kathleen gives due credit to an important political, social, and musical movement as well as the two women who helped bring this movement to pop culture consciousness. Writer and director Liz Thaler succeeds in creating a rich narrative out of a story only told in bits and pieces through the media, and also creates seemingly authentic dialogues between the two women. The play is definitely a must-see for anyone with an interest in nineties music history, the riot grrrl movement, or the history of feminism. For those who came of age listening to riot grrrl bands bands, this is a nostalgic trip down memory lane.

(Courtney and Kathleen plays at The First Floor Theatre at La MaMa, 74A East 4th Street, through August 22, 2011. Remaining performances are Wednesday, August 17th at 2PM; Friday, August 19th at 6:15PM; Sunday, August 21st at 2:15PM; and Monday, August 22nd at 4:15PM. Tickets are $15 and are available at fringenyc.org. For more show info visit inextremistheater.org. For more info about FringeNYC visit fringnyc.org.)