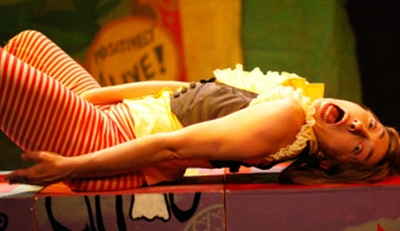 The old adage, “you have to kiss a lot of frogs to find a prince,” certainly holds true in Naomi Grossman’s one woman show Carnival Knowledge. The play mainly consists of Grossman’s (supposed) real life misadventures in dating; detailing the cretins, perverts, and dullards she goes on dates with all in the name of finding love and sexual satisfaction. The play’s title refers to the carnival theme which Grossman uses to share her stories, presenting her particularly freakish suitors as sideshow attractions.

The show opens with Grossman dressed in a circus ring master outfit, juggling an array of silicone dildos in varying flesh tones. "Some girls juggle one at a time; I juggle ones that are bad for me,” she says. What follows is Grossman reenacting some seriously terrible dates, including: a moronic Trader Joe’s worker, a political campaigner who considers being allowed in to use the bathroom as an invitation to drop trou, a man who wears a giant chicken costume to all of their dates, and an overly impassioned Mexican who shows his love by climbing over a guardrail on a pier then falling and suffering brain trauma. Cleverly, Grossman packages each date thematically and with reflective humor. The aforementioned political campaigner’s over-aggressive gesture is followed by such cute one liners as “But erections aren’t even until November!”, “He’s definitely left leaning”, and “He put me in a blue state.” Grossman’s attraction to such questionable suitors is seemingly explained when she writes off a man for being too nice and commitment oriented, saying, “I wasn’t ready for him, that’s what the carnival is for, merriment until you settle down for Lent.” While the story of “single girl in city” enduring dating misadventures is not a new storyline (Sex and the City had its own freak show episode), Grossman’s likability, humor, and relentless energy imbue the topic with freshness.

Thankfully, Grossman does more than just reenact all her bad dates (which are funny, but offer little in the way of linear plot). She also discusses her admiration and idolization of her parents’ long term marriage and then her own disillusionment when they separate and divorce.  She also offers a larger perspective on her dating asking, “Will my refusal to settle down prevent me from meeting the one?”  She also briefly ponders the seeming lack of love and connection in her sexual conquests wondering “If there’s no love, what is there?”

During the course of the show Grossman shows a gift for both comedic writing as well as physical humor, able to fully channel the personas of her many terrible dimwitted suitors as well as her own wide eyed naïveté. Grossman never hesitates to make fun of herself, making her a likable protagonist in her many stories as she acknowledges her own flaws. However, a few of her clever one liners occasionally slip past the audience’s ears due in part to hurried delivery, too low of a tone of voice, and perhaps imperfect acoustics in the theater. Carnival Knowledge offers an enjoyable and often hilarious look at a single woman’s quest for love in Los Angeles, a city with more than its fair share of side show attractions.

(Carnival Knowledge: Love, Lust, and Other Human Oddities plays at the Kraine Theatre, 85 East 4th Street , through August 26, 2011. Remaining performances are Wednesday, August 24th at 2:30PM; and Friday, August 26th at 6:15PM. Tickets are $15 and are available at fringenyc.org. For more show info visit naomigrossman.net. For more info about FringeNYC visit fringnyc.org.)