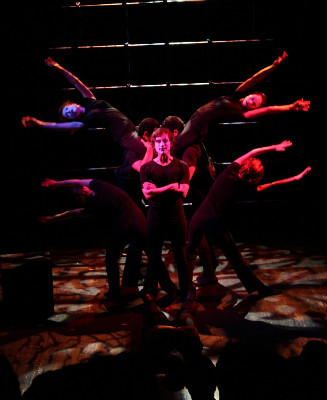 Words Don’t Work, presented by Broken Box Mime, bills itself as “not your average mime show." But don’t go in expecting anything revolutionary. I went in expecting a fresh take on the practice of mime. Admittedly I'm not an expert on the genre, but Words Don’t Work looks very similar to the traditional mime shows I’ve seen in the past. This isn’t necessarily a bad thing though, as Broken Box Mime is quite good at what they do.

The show consists of a series of short scenarios mimed to contemporary music. The scenarios range from heartfelt and sentimental to outright silly. The mimes are skilled in their craft: the precision of their movement is so precise that at times it is easy to forget the objects they interact with aren’t tangible. And their emotions are deep, well-communicated, and cover a broad range. As an ensemble of mimes, this company is pretty stellar.

Despite the obvious mastery of the craft, Words Don’t Work, running approximately an hour and a half, feels far too long. When the sketches are good, the time flies by. A recurring subway skit illustrating numerous ridiculous and terrifically relatable moments on the MTA is particularly humorous and I found myself looking forward to it. On the other hand there are several skits where I found myself wishing the show was shorter by half. One particular sketch entitled “Icarus” made me feel as if I were watching a particularly dramatic episode of 21 Jump Street reenacted by mimes.

Overall, fans of movement, mime, and non-traditional theater styles should probably take the time to catch Words Don’t Work. At the end of the day it’s a cute, well-executed show.