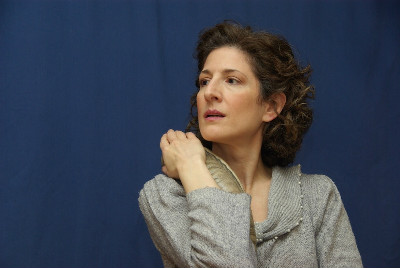 Carol Lempert in After Anne Frank.

BOTTOM LINE: A well-constructed one-woman show about an actress's lifelong relationship with the Anne Frank story.

Since its initial publication in 1947, Anne Frank’s childhood diary of her time spent in hiding has been one of the most influential and widely read works relating to the Holocaust. It has been translated into 67 languages, sold over 31 million copies, and been adapted for the stage and film.

Now, over sixty years later, Carol Lempert’s terrific new one-woman work After Anne Frank arrives at the Fringe Festival. Whether it is on stage or film, there have been no shortages of Holocaust related artistic projects (as Lempert says “there’s no business like Shoah business”), but this is not a traditional Holocaust-inspired work.

After Anne Frank breaks from the pack by focusing not solely on Anne Frank, or her family, or even the Holocaust. Rather, in this very unique and interesting one-woman performance, Lempert discusses how the work has affected her as a Jewish woman and as an actress.

Lempert comes to this task from an interesting perspective. A Jewish-American actress, she never had a Bat Mitzvah or a strong understanding of her religion, but as an actress wound up playing at different points of her life all of the female Franks on stage. This includes the title character, Anne's sister Margot, and then later in life Anne’s mother Edith.

Adding another level of complexity, Lempert has performed all of the competing versions of the play, including the Pulitzer Prize-winning adaptation (on which the film is based) by Frances Goodrich and Albert Hackett that appeared on Broadway with supervision from Lillian Hellman; the banned Meyer Levin version; and the Wendy Kesselman revision from the late 1990s.

Lempert, under the direction of Janice L. Goldberg, weaves together a thoughtful, entertaining, and intriguing discussion of her experience. With humor and a sense of rawness she relates her childhood feelings of sharing many traits with Anne Frank while living such a different life. In a poignant and tender storyline that reoccurs through the play Lempert discusses her Uncle, a Holocaust survivor who is unable to share his experiences with his niece. Equally interesting is how Lempert addresses the debate over the incessant commercialization of the genocide and the “de-Judification” of the Anne Frank story by various artists.

This is a very exceptional, moving, and well-constructed work that we hopefully have not seen the last of.