Tickets are £14 (concessions available) and are available at edfringe.com

What I Heard About the World 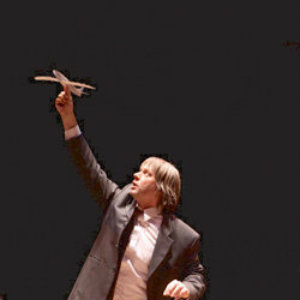 WHAT I HEARD ABOUT THE WORLD. Photo courtesy of EdFringe.

BOTTOM LINE: This finely crafted think-piece, as charming as it is sharp, subtlety (and sometimes not so subtlety) wields a worthy, important message.

Facts, facts. What’s in a fact? That which we call a fact by any other name would smell as sweet? Or hold as much water? What I Heard About The World confronts our contemporary fact-flooded condition with humor, grace, and heavy guitar-solos, and plays at St. Stephen’s Church now through August 19th.

Three men, sitting, lying, standing, hold their places on the set prior to the audience arrival, amid enough odds and ends to evoke a cross between a tidy but distinctly man-only dwelling and a bizarre science-y talk-show. Eventually, a cabinet in the back reveals itself to hold fastidiously ordered supplies: canisters of salt, bottles of water, pint glasses, paintball guns; all to have their very specific purpose disclosed through the course of the next hour or so. A fishless fish tank humbly sits furthest downstage, expectantly.

What follows is a highly curated barrage of information, factoids, anecdotes, and true tales, some of which have already become Internet highlights with their own fifteen minutes. Twined together with some acting-out, electric guitar, and clever bits to underscore the absurdity so many of the stories present, the three men quickly assert themselves as likable and trustworthy. And clever, to boot.

Devised and written over the past five years by the three performers, Jorge Andrade, Alexander Kelly, and Chris Thorpe, What I Heard About The World intelligently proclaims a familiar though nonetheless necessary notion: when facts became Google-able and Internet-easy, they also became cheap, flooded, and frivolous. No longer the stuff of importance, facts have become a network of cyber-reality and supposed authenticity, operating all too often as stand-ins for actual experiences. These three men, armed with information aplenty, measuredly manage their strung together little pearls to transforms them to clever provocation.

Culminating in a bloody massacre and subsequently a reminder that access and information can also be powerfully positive, the three men reach far and wide to then gift their message to the audience: these stories, these moments, these facts are nebulous, changeable, and only crushingly definitive of the world when they are allowed to be. What I Heard About The World is a beautifully different piece that has much to offer.

(What I Heard About The Worldplays at St. Stephen's Church, St. Stephen's Street, through August 19, 2012. Performances are daily at 4:35pm (not the 13th). Tickets are £14 (concessions available) and are available at edfringe.com. To contribute your own stories go to whatiheardabouttheworld.co.uk.)

Edfringe shows are rated on a 1 through 5 scale: