By Elephant and the Mouse Theatre 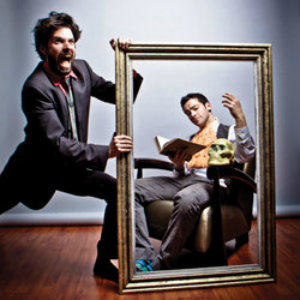 Repertory Theatre by Elephant and the Mouse Theatre.Photo courtesy of EdFringe.com.

BOTTOM LINE: With absurd and physical humor aplenty, this tidy-tight piece is a crowd pleaser for theatre aficionados everywhere.

Imagine the worst pitch meeting of your life. And imagine that in this meeting, you’re pitching the first play you’ve ever written to a man who, despite his seeming closeness to your now deceased father, is hell-bent on changing the piece for the worse and insisting that the play is an homage to said deceased father. Which it isn’t, surely. And he will not stop talking about Hamlet. This relatively simple narrative, stretched to absurdly delightful proportions, is Repertory Theatre, playing now through August 18th.

With meta-theatrical and theatre-insider humor abounding, the tiny Studio B space at the Edinburgh College of Art is transformed into the too-warm office of the Artistic Director (emphasis on capital A, capital D) of a Repertory Theatre (capital R, capital T). In this world where the only acceptable play for a Repertory Theatre to perform is Hamlet, even nepotism won’t save the poor young playwright who has come to the theatre that gave his late father fame. A glorious mix of amplified true-isms and all too recognizable moments pepper the stage, as the two men almost dance around the fantastically choreographed struggle between establishment and the yet-to-be-established. And that’s just the first Act.

For all those who’d like to take a little potshot at Artistic Directors (capital A, capital D), or enjoy a hearty helping of heavily meta-hijinks, this very sleek little piece is well worth seeing. Though, perhaps, don’t sit in the front row.

(Repertory Theatreplays at C eca @ Edinburgh College of Art, EH3 9DF, through August 18, 2012. Performances are Wednesdays through Saturdays at 6:15PM. Tickets are £7.50 - £9.50 (concessions available) and are available at edfringe.com.)

EdFringe shows are rated on a 1 through 5 scale: