Made for Each Other 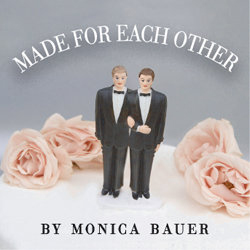 BOTTOM LINE: A comedic solo show about love, dying and the importance of relationships.

Solo shows, particularly those involving grandiose portrayals of archetypes, are often heavy on kitsch. It's because of this expectation that Made for Each Other is extra touching: this story is a really a dramedy, and John Fico's sincere performance comfortably balances its humor with an intimate look at dying.

In Made for Each Other, we experience the budding relationship of 50-something Vincent and 40-something Jerry. Though they haven't been dating long, the stars have aligned, and they decide to get married. But Vincent harbors a secret about his health.

Both men have subconscious advisors: Jerrys long-dead grandfather and Vincents Alzheimers-ridden mother. Both men address loss while understanding what it means to find true love. And Fico expertly portrays these sensitive relationships with just the right amount of shtick.

Fico gives a powerful performance in these various roles, coloring Jerry's grandpa and Vincent's mom with as much detail as is given to the men themselves. Told through monologues with distinct costume changes, director John Fitzgibbon hones in on the story's specificites and the result is a polished presentation. The characters are represented as genuine, though humorous, individuals -- and the story is grounded within this sensitivity. That said, Made for Each Other is still quite funny and highly entertaining. And Fico's nuanced work is well worth seeing for yourself.

(Made for Each Other plays at Laughing Horse @ Bar 50, 50 Blackfriars Street, through August 26, 2012. Performances are August 15th through 26th at 4:50PM. Tickets are free, and can be purchased at edfringe.com.)