Tickets are £10.50 (concessions available) and are available at edfringe.com 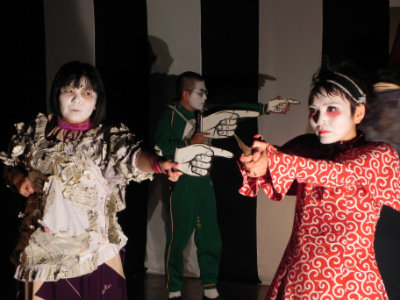 BOTTOM LINE: Delightfully overwhelming from start to finish, this spectacle-driven production is an hour and change well spent.

The tendency of daughters to cavort with men who personify the opposite of what parents identify as winning qualities is timeless, culturally borderless, and seemingly inspires endless fodder for stimulating drama. Another installment of the story, this time a high-intensity Japanese adaptation of Threepenny Opera, fills the 2nd floor theatre of C Chambers to the rafters with color, cabaret-type crooning, and, of course, parental disapproval galore. Charming and bizarre (in the best way), Hanafuda Denki, plays now through August 18.

Danjuro lives a happy life as a famous funeral director in downtown Tokyo, specializing in offering the most comprehensive death menu around for those customers who haven’t yet figured out the best way to die in time for their own funerals. Being dead himself, Danjuro makes a fine death salesman. His daughter, Karuta, however, is less than smitten with the dead, and goes and gets herself involved with a living man (the horror!). Danjuro, along with his wife and band of dead buddies, must figure out a way to get Karuta to marry a handsome deceased man instead. Much conniving, singing, and dancing ensues.

Fantastically dedicated and beautifully decorated actors stream in and out of the action in this terrifically staged piece, pumping the intimate performance space full with nearly more energy than it can handle. Spooky and aesthetically delicious, Hanafuda Denki is an entirely enjoyable piece of entertainment.

(Hanafuda Denki plays at C Venues on Chambers Street, through August 18, 2012. Performances are daily at 12:55PM. Tickets are £10.50 (concessions available) and are available at edfringe.com. More information at http://music.geocities.jp/ryuzanji3/r-hana12)