Eat Sh*t: How Our Waste Can Save the World! 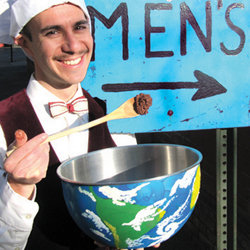 BOTTOM LINE: An informative musical that wants to teach you something about the history of sanitation.

Eat Sh*t may be about pooping, but it has an important message. That brown stinky waste we dare not discuss in public actually has many useful purposes, and could radically alter our reliance on resources. Playwright and star Shawn Shafner wants you to know this; he is an off-stage activist and founder of The Poop Project, an organization that promotes sustainable sanitation.

To its social message, Eat Sh*t has much information to impart. And it makes a strong case for the reformation of how we dispose of our waste. I know I'll give poop more respect going forward. Though Eat Sh*t is clear about its agenda, it wisely uses all of the glorious potty joke opportunities suited to the subject to communicate the message. And boy is this show packed with poop puns.

Shafner plays Carl, a marketing executive who is visited by Mr. Poop, a live version of his excrement who encourages Carl to use his smarts to market humans' personal natural resource, thereby helping the energy crisis and conserving water. Naturally, Carl is dubious about the stinky proposition, but as Poop takes him on an educational journey through history, the rationality becomes crystal clear.

Eat Sh*t is a musical, and includes a few boisterous songs to propel the plot. The humor is campy and the audience even gets in on the joke, representing humanity as the 'Poopers' we are. Its universal subject matter, silly sensibility, and heartfelt message enhance the experience. This production did leave me with a few questions regarding its tone. A certain self-consciousness that I'm not sure is intended occasionally gets in the way of the comedy; a complete commitment to silliness amplifies a show of this nature. To be fair, I saw a very early performance and the tone has likely been clarified by this point. But I suspect the impetus of the production is instruction rather than entertainment (with entertainment merely facilitating instruction), and if you walk out of theatre having learned a thing or two about poop's possibilities, the show has reached its goal.

(Eat Sh*t: How Our Waste Can Save the World! plays at C Nova, India Buildings, Victoria Street, through August 26, 2012. Performances are August 3rd through 27th -- no show on August 13th. Tickets are £ 7.50 and are available at edfringe.com.)