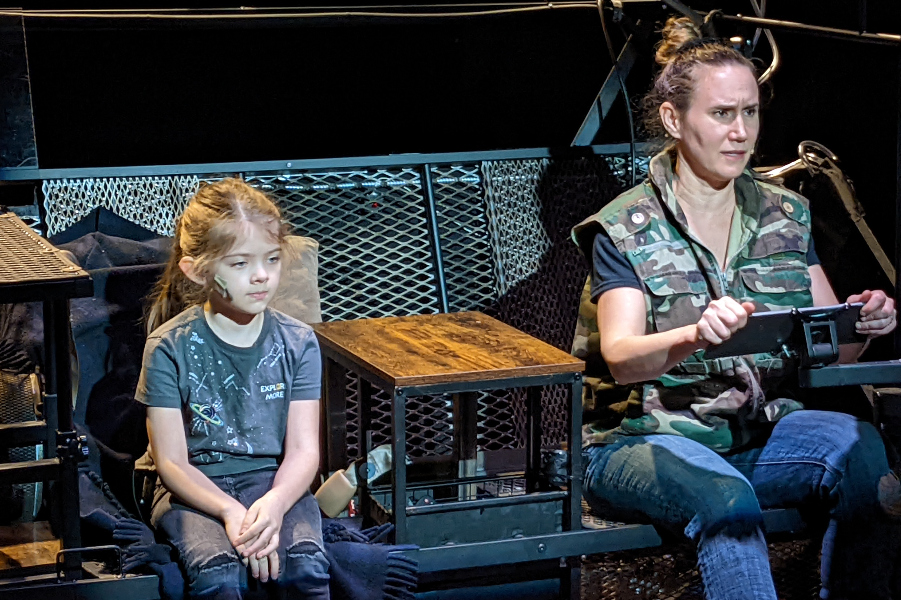 BOTTOM LINE: War Dreamer is a beautiful showcase of the trauma that veterans face and the very little support they receive.

War Dreamer, written by Leegrid Stevens, tells the story of Jesse (E.B. Treadway), a Iraq veteran who, upon returning home, struggles to quell the nightmares, memories, and PTSD as she adjusts back to civilian life. This non-linear play is told through memories that bleed in and out of reality, frightening visions, and with a dream-like quality that keeps us guessing the whole time about what’s real and what’s not. Stevens and her team have created something truly beautiful and heartbreaking with this piece.

The use of non-linear narrative can often make or break a story. Done well, the audience gets to put the pieces together in an extremely rewarding and exciting way. Done poorly, the show can feel disjointed and confusing, leaving audiences not sure where or when things take place. War Dreamer is one of those plays where this device works brilliantly. Showcasing the trauma of a veteran soldier in fragmented scenes that bleed into each other places us right in those terrifying memories that plague our main character's mind. We don’t know what’s real and what’s not because she doesn’t know what’s real and what’s not. Every moment is meticulously crafted and placed by Stevens to give us just enough information (but not too much), until finally everything clicks into place and we, just like Jesse, are knocked upside the head with reality.

With a show that is so fragmented, it is essential that the design elements reflect this. From lighting to set to costumes, it is clear that intense thought was put into how each piece would interact with the memories and moments. The set design, by C De La Cruz Rodriguez, in particular stands out. With scenes moving between a base in Iraq and an American living room, the set must show various elements of both. Cruz solved this problem by making everything feel very industrial and worn, like the inside of an army base, but in shapes like a couch and a coffee table. This harsh juxtaposition pairs well with Jesse constantly returning to her time in the military. Stoli Stolnack's lighting and Jevyn Nelms' costumes also do a great deal for this feeling of something being ever-so slightly off at all times.

The performances are well done all around, with Treadway giving an absolutely heartbreaking performance as Jesse. War Dreamer is largely about seeing everyone else and the world through her eyes, so Jesse is in every single scene. Her performance, along with the structure of the script and design, are captivating from one moment to the next.

One thing that stands out about War Dreamer is that it doesn’t aim for a singular view of the effects of the military on soldiers. Rather, it takes two potentially conflicting statements—“The U.S military has done and continues to do very questionable things” and “We as a country treat veterans horribly and lack the mechanisms to help them truly succeed and get the care they need after service”—as being able to coexist. Regardless of your opinion about the U.S military, you should be able to connect to, and empathize with, Jesse as she struggles to do the things that many of us take for granted. Everyone around her tries to help, but none of them can truly understand. She is alone, and we feel this loneliness from the first moment. War Dreamer is about someone trying to survive in both war and civilian life, and it shows us that both battles are difficult.

(War Dreamer plays at the Loading Dock Theatre, 170 Tillary Street in Brooklyn, through April 3, 2022. The running time is 1 hour 50 minutes with one intermission. Performances are Thursdays through Saturdays at 7 and Sundays at 3. Tickets are free and are available at eventbrite.com. For more information visit loadingdocktheatre.org.)