To purchase tickets for events at The Town Hall, visit thetownhall.org

Presented by The Town Hall and Mark Cortale 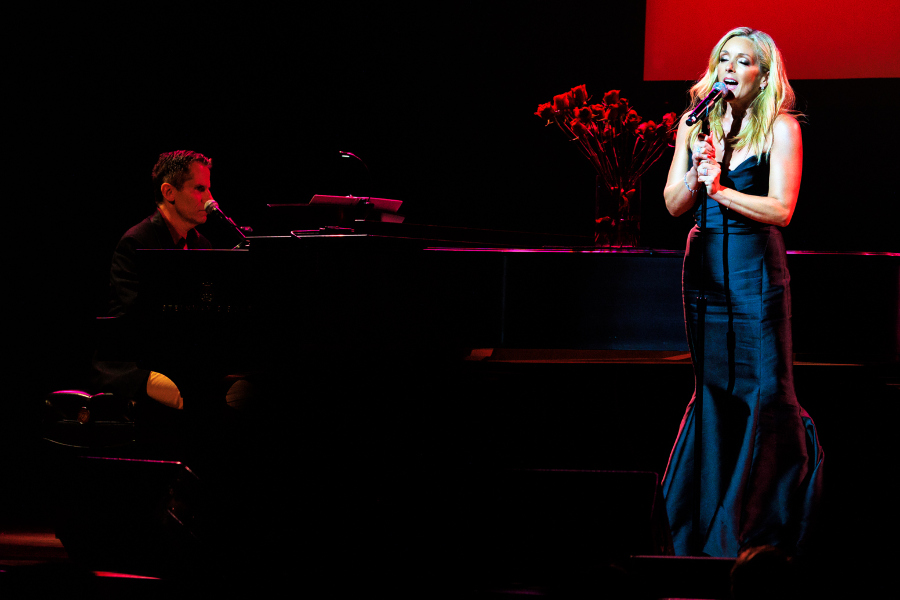 BOTTOM LINE: In each iteration, Seth Rudetsky joins with a Broadway star for a night of stories and song.

“Thank you for NOT watching the Emmys” is how music director and host Seth Rudetsky started his evening with Jane Krakowski, held the same night as…well, you know. It was a natural segue into an opening bit about how Krakowski (who has five Emmy nominations but no wins) thought she was doing the “East Coast Feed” for the awards show, which supposedly explained why she was all dressed up in a sleek black strapless gown. As if this particular Town Hall audience (let’s just say the line for the men’s bathroom was much longer than the women’s) needed any explanation for such fabulousness.

Seth Rudetsky’s Broadway is an ongoing series where Rudetsky joins with a Broadway musical theatre star (Brian Stokes Mitchell and Vanessa Williams appeared earlier this year) to share showbiz stories and sing songs. Rudetsky alternates between chatting with the performer on lounge chairs and accompanying them on a grand piano—it’s essentially part cabaret, part war stories shared with close friends at the bar afterwards.

If you are unfamiliar with Rudetsky, he’s sort of a cross between obsessed fan and uber-knowledgeable expert. His enthusiasm is infectious, he talks a mile a minute, and occasionally chimes in to a song a la The Rocky Horror Picture Show, giving a spoken lead-in to an upcoming lyric. Many of Rudetsky’s events involve some amount of what he calls “deconstruction” (yes, I know—for the academics in the room, think of it more as thick description or close reading), where he zooms in on minutiae of a performance, something like Donna McKechnie’s single vs. double head-pop in “Turkey Lurkey Time,” that someone who hadn’t watched it twenty million times might not have noticed. While there was a small bit of this (including a somewhat jumbled intro to a short video clip from Grand Hotel), deconstruction—or whatever you want to call it—isn’t really his focus here. Seth Rudetsky’s Broadway is more about the live performance—of both song and story.

With Jane Krakowski, the stories spanned from her time with the Milliken Breakfast Show (a 1970s “industrial” that was THE gig for Broadway performers), to her experiences in Grand Hotel and the revivals of Nine and She Loves Me. The evening followed a simple pattern: after Krakowski (often at Rudetsky’s prompting—“oh you have to tell the story about…”) recounted a tasty tidbit or two (like her insane dragged split move in She Loves Me), the two then adjourned to the piano where she performed a related number (in that case, “A Trip to the Library”).

I counted ten songs throughout the evening, including “A Little Brains, A Little Talent” from Damn Yankees, “Adelaide’s Lament” from Guys and Dolls, and “I Want to Go to Hollywood” from Grand Hotel; i.e., songs from the various roles Krakowski has played (whether in New York or London) throughout her career. Other songs, like Ann-Margret’s “Thirteen Men." highlighted Krakowski's tendency to play the dumb (but actually wickedly smart) sexpot. And with a few, the connection was more tenuous, like a “deconstructed” performance of “Don’t Cry Out Loud” (I think the connection involved a fundraiser—Rudetsky and his husband spearhead several charity efforts, including the recent “Stars in the House” pandemic video series), and later an updated version of Pal Joey’s “Zip,” now called “Tweet,” where Marc Shaiman rewrote the lyrics to reflect current events (sample line: “Jesse Williams’ bat sells seats”).

For me, the highlight of the evening was the section about the 2003 revival of Nine, a production in which Krakowski was memorably lowered down from on high to seduce Antonio Banderas in Carla’s “A Call from the Vatican.” The whole experience, which culminated in Krakowski’s jaw-dropping exit back up into the rafters while hanging upside down from silks, ranks in my top ten most unforgettable Broadway moments; from her description of it all, it seems she feels the same. Starting from her initial audition for director David Leveaux (who apparently needed some convincing), Krakowski took us through the genesis of the number, which she knew had to be radically different from Anita Morris’s legendary original take. The story exemplified the way in which both director and performer contribute to developing a performance (while Krakowski eagerly jumped on Leveaux’s idea of flying, it was apparently she who stumbled on the use of silks while watching Broadway Bares), before eventually culminating into Krakowski’s first full run-through of the number on the stage of the Eugene O’Neill—which happened during the first preview (she had been rehearsing the song at a warehouse in New Jersey, and since the silks weren’t delivered until the day of the first preview, they couldn’t be hung until the dinner break right before the performance).

If that last paragraph was catnip for you, then you're exactly the audience for Seth Rudetsky's Broadway. But if you're someone who can't tell the difference between directors Jerry Zaks and Gerry Gutierrez, you may get less mileage, especially with the stories. It's also worth nothing that production values are very minimal (no designers are credited)—at one point, Rudetsky even had to stop playing because he couldn't see his sheet music. The two handled the whole thing with humor and aplomb—Krakowski sat down next to him so she could sing while holding a phone flashlight up (a stand light was brought out once the song ended).

Throughout, the two clearly had a blast with the material, something that was perhaps most evident towards the end, as they got to the obligatory 30 Rock segment, which included a trivia game for a few audience members, some home video of game night at Seth's, a medley of some of Jenna Maroney's hits (I still can't get "Muffin Top" out of my head), and even a surprise appearance by Titus Burgess (who first appeared on 30 Rock before then starring with Krakowski on Unbreakable Kimmy Schmidt).

By pulling together signature on-stage moments with less-known off-stage memories, Seth Rudetsky's Broadway also suggests some intriguing comparisons between the performer and the role. A common theme throughout the night was Krakowski's eagerness to perform at all costs. When recounting that memorable She Loves Me split, Krakowski explained that after trying it, her scene partner Gavin Creel asked her "are you sure you want to do this eight times a week?" Krakowski's response could have come straight out of the mouth of Jenna Maroney: “Imaging the applause in my head, I said yes.”