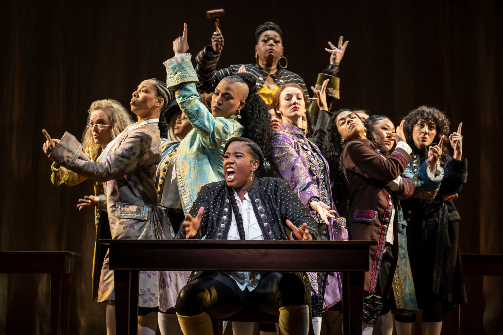 BOTTOM LINE: A diverse revival of a classic musical, 1776 turns a new lens to our nation’s past—and present.

To be American means existing in perpetual dialogue with our nation’s past, particularly as we apply modern awareness toward our predecessors’ choices, and confront both the positive and problematic histories that led us to where we now stand. The parallel scope of the American theatre often turns this same critical lens toward its canonical plays, reinterpreting or revisiting them through contemporary eyes. In both respects, Roundabout Theatre Company’s production of Sherman Edwards and Peter Stone’s 1776 takes this approach: by reviving a classic musical about our nation’s origins with fresh staging and a diverse female and non-binary cast, the production offers a new take on America’s history, and the timeless questions its citizens and leaders face.

Co-directed by Jeffrey L. Page and Diane Paulus, Roundabout’s 1776 breathes diversity into the script’s white-and male-centric world, peopling Edwards and Stone’s 18th-century Congress with a female, non-binary, transgender, and largely BIPOC cast. While Hamilton and other popular musicals have set similar precedents toward non-traditional portrayals of famous historical figures or theatrical roles, this decision nonetheless makes a profound statement about the voices often erased or minimized in our nation’s origin story and political sphere.

Set in Philadelphia on the eve of the American Revolution, 1776 follows the Second Continental Congress as its members confront the pivotal choice to declare independence from British rule and establish America as a sovereign nation. Faced with a divisive and oft-obstructive Congress, fervent Massachusetts delegate John Adams (Crystal Lucas-Perry) leads the charge for independence, supported by progressives including Dr. Benjamin Franklin (Patrena Murray) and opposed by a loyalist faction headed by Pennsylvania’s John Dickinson (Carolee Carmello). When the motion reaches consideration, but its approval hinges on unanimous consent, Adams and Franklin redouble their efforts, lobbying to bridge the varied interests of individual colonies and their representatives, and enlisting Virginia’s Thomas Jefferson (Elizabeth A. Davis) as the reluctant author of a formal Declaration of Independence. Faced with widening internal tensions, the conundrum of slavery and other polarizing issues, and the threat of British forces against General George Washington’s ragtag, under-resourced Continental army, Congress and its delegates must forge a difficult and contradictory path in the name of freedom and national unity.

Driven by its powerful cast and astute political insight, Page and Paulus’s revival nicely marries the show’s lasting impact and modern topicality. Each member of its ensemble is as unique and distinctive as the states and historical personas they depict, forming both a powerful sum of parts and a cohesive whole. This interplay shines most clearly in Page’s tight and energetic group choreography, as well as in standout solo performances including Shawna Hamic’s flamboyantly Southern Richard Henry Lee; Ariella Serur as the newly-wed Martha Jefferson and fresh-faced Georgia delegate Dr. Lyman Hall; Sara Porkalob as South Carolina’s menacing and shrewd Edward Rutledge; and Allyson Kaye Daniel as the wise and grounded Abigail Adams to Lucas-Perry’s fiery John.

While some of the show’s lighter numbers can read a bit trite or dated, many familiar songs prove fertile ground for modern reinterpretation, striking chords with our current racial, gender, and class consciousness. Strikingly rendered by Salome B. Smith and the ensemble, the anti-war ballad “Momma, Look Sharp” becomes a haunting dirge for countless black lives lost to force; the same can be said for “Molasses to Rum,” an unflinching look at slavery’s cruel practices and the nationwide complicity in the “Triangle Trade” on which they stood. Supplemented by Jen Schriever’s lighting, “Cool, Cool Considerate Men” captures the chilling ethos and economic forces leading rich and poor alike to value status quo over human liberties, while Serur and Davis infuse the romantic “He Plays the Violin” with a fascinating mix of obsession, sexual desire, and gendered power dynamics. Even “The Egg,” a familiar salute to our nation’s iconography and beginnings, cracks open to span its ensuing history, as electric violin riffs and video projections of activist movements from Selma to Standing Rock celebrate the ideals which drive us beyond time and circumstance.

By stylistic choice or unconscious association, revivals inherently reflect the times in which they are produced, and 1776 epitomizes this concept in every chapter of the show’s, and America’s, history. At a point of national reckoning, Roundabout’s current incarnation highlights the political divisions, racial issues, and checkered historical choices which still impact us, and speaks to our newfound awareness of just how deeply these same forces shape today's political climate and national self-conception. In many regards, Americans are still reaping what our founders sowed, and it is this era’s confrontation with our nation’s ideals and shortcomings that makes 1776 just as impactful in 2022. Whether or not the unity our founders sought is truly achievable, we are still driven by the same principles and paradoxes which fueled them, and it is those motives that push us forward as we shape America’s future.