A Play by Mail 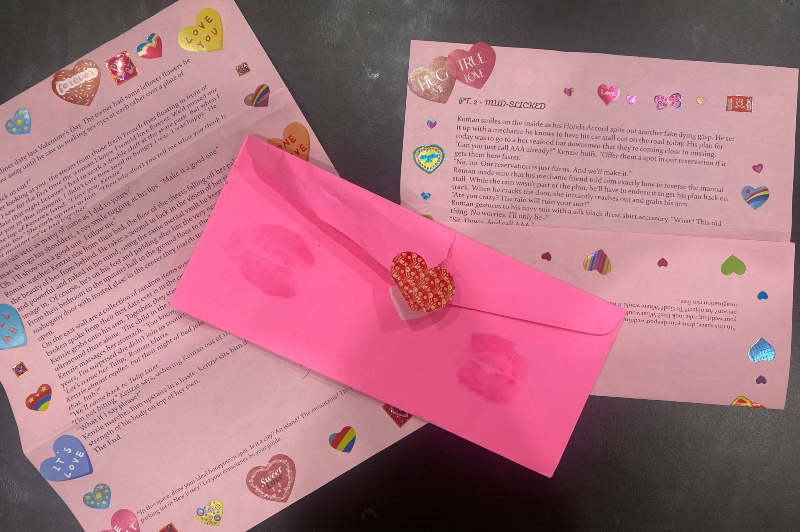 Letters received as part of The Love Letter Plays. Photo by Max Berry.

BOTTOM LINE: While good for readers of short fiction, this love-story-by-mail isn't as “immersive” as advertised.

The Love Letter Plays is written by Austin Bowers and tells the story of a relationship over the course of three short fiction stories sent out by mail and centered around Roman and Kenzie, characters from an improvised sentence on the Comedy Central show, Nathan For You. The first letter is the couple’s first date, the second the proposal, and the third their honeymoon. Audiences/readers get to follow along as the two protagonists fall in love and begin to start a life together.

The story itself is very sweet and I did find myself rooting for these two to get together and work through every disagreement. But while it was marketed as an "immersive play" through the mail, I feel as though that concept could have been leaned into further. I love the idea of getting letters in the mail and piecing a theatrical story together, but I did not feel included in the story or experience enough for me to justify it as theatre. Though with Bowers being from a fiction writing background this does make sense.

That being said, if those going into this experience know to expect a series of fiction stories, I do think this concept will appeal to many. The letters are delivered in fun bright pink, lipstick-stained envelopes and have silly drawings and stickers on the inside. If you’re someone who likes getting fiction magazines or comics on a monthly/weekly basis, I think you will get a good deal of enjoyment out of this experience. I just found myself wanting to be more immersed in the story, rather than merely an outside observer.

The Love Letter Plays is by Austin Bowers, based on characters from his appearance on Nathan For You. Produced and conceived by Sean Pollock.