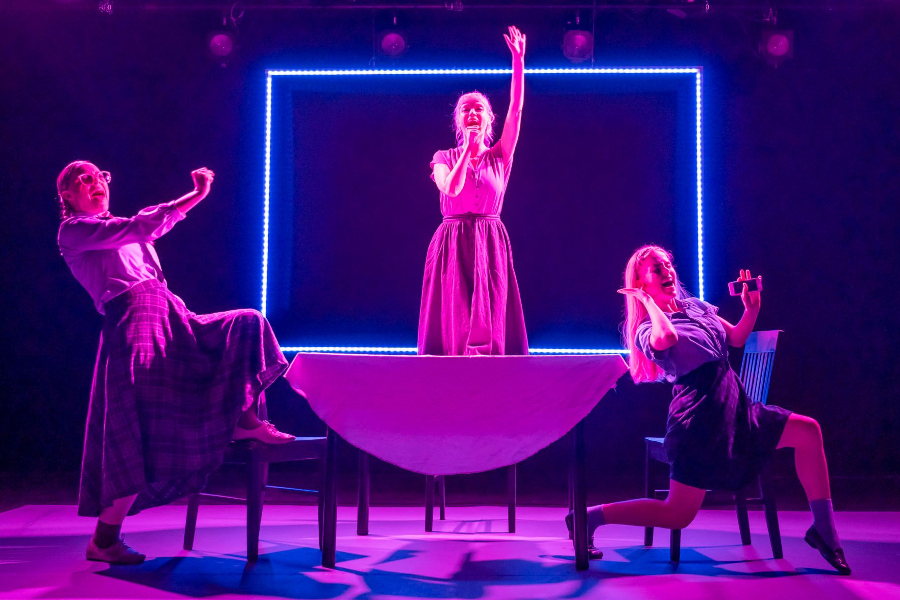 BOTTOM LINE: A timely dark comedy that is as fun as it is terrifying.

Teenage girls will be teenage girls, whether in present-day America or Nazi Germany. So, in the play H*tler's Tasters, when the teenage girls from good German stock who have been selected to taste Hitler's food for poison take breaks for selfies on their cell phones, the anachronisms don't feel that out of place. Sometimes as they gossip in their teen speak it's easy to forget where they are, but then the conversation will take a turn to what is really happening, and that makes for a play that is both hilarious and terrifying.

Liesel (Hallie Griffin), Hilda (MaryKathryn Kopp), and Anna (Kaitlin Paige Longoria) consider their job an honor. They get to do their duty for their country while being served three meals a day on fancy dishware. They just have to wait an hour after each meal to see whether or not they'll die. (If they don't die, the food is safe for Hitler.) While it's infuriating the way they blindly believe Hitler's lies and so callously speak about Jews being murdered, it's hard not to sympathize with them, especially when they transgress in small ways. For example, they know the United States is the enemy, but they can't totally hate a country that is home to the movie stars they swoon over, like Clark Gable, Fred Astaire, and Cary Grant.

The cast, which also includes Hannah Mae Sturges as Margot (a late addition to the tasters), is uniformly believable (the schoolgirl costumes by Ashleigh Poteat also help). Kopp in particular nails the alpha temperament of Hilda. Like Regina George from Mean Girls, she passive-aggressively controls the others, bullying them to hide her own insecurities.

Plays like this one run the risk of losing steam after the initial delight of a clever concept, but Michelle Kholos Brooks' smart dialogue reflects the subtle changes in the girls' mindsets over time and keeps the play moving without becoming too repetitive. And the play's short running time ensures it doesn't wear out its welcome. Director Sarah Norris finds many ways to change up the basic "three girls around a table" setting, with choreographed moments by Ashlee Wasmund breaking up the scenes.

In a statement from the playwright in the program, Brooks writes "Right this very minute, bad actors in government are working to undermine our country. They are once again trying to control the ability of women to have autonomy over their bodies." The night before the play's official opening night, a draft of a majority opinion from the Supreme Court overruling Roe v. Wade was leaked, proving both her point and the necessity of plays like H*tler's Tasters—we can never forget the dangers of complacency.