By William Shakespeare; Directed by Robert Icke
Produced by the Park Avenue Armory and Almeida Theatre 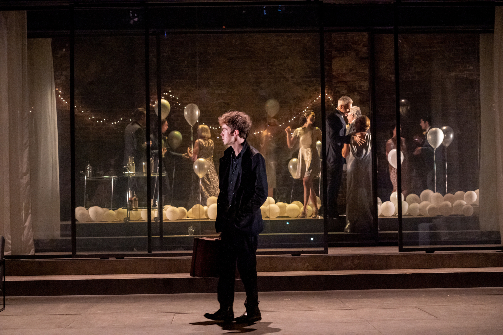 It is not only the slick costumes, minimalist set design (both by Hildegard Bechtler), and overt technology (security cameras and hidden microphones) that make Robert Icke’s Hamlet contemporary. The production, hailing from London’s West End and currently running at the Park Avenue Armory, provides new insight into today’s youth and gives us a fresh take on Shakespeare's canonical play.

Although I enjoyed the production, a strange thought kept nagging at me: why do I have trouble emotionally connecting with the characters? “Can’t get a good read on Hamlet” I scribbled in my notes. Performed by Alex Lawther, the prince of Denmark appears somewhat inert, mellow, and meek, as opposed to the more traditional interpretation of a rebellious soul seeking the truth. Barely dragging his feet across the vast, nearly empty stage in the beginning, Lawther's Hamlet exudes a sense of lethargy that is in striking contrast to the lively wedding party unfolding behind the sliding glass doors upstage.

It hit me only much later: it is not merely the personal grief that is eating at him—it is an incapacitating Weltschmertz, a melancholy so strong that it spreads across the entire family, the court, and the kingdom of Denmark. The appearance of the ghost of Hamlet's father in front of the guards and Horatio usually seems to indicate the “realness” of it. But this time around I started to suspect a collective hallucination of the citizens whose natural order was threatened when the monarchical order was broken. Could it be that the drama of Shakespeare’s play is not the one of a grieving individual seeking revenge, but instead of a society mourning its supposed golden age? Icke’s production seems to hint at that.

The video design by Tal Yarden incorporates news footage on a giant screen hanging above the stage. The collective state of anxiety fed by the newsreels of war action or national tragedies quickly becomes contagious. Although the events in the fictional Denmark might not have the same meaning to us as the news we watch every day, the medium cuts right through logic, triggering our own cultural traumas. The presence of video projections feels simultaneously distancing and easy to relate to, much like Lawther’s Hamlet.

The house lights slowly go up (lighting by Natasha Chivers) during Hamlet's soliloquies, making the audience members almost conversation partners to the Danish prince. The aloofness he demonstrates with other characters is almost gone when Hamlet speaks to the audience. And Alex Lawther is very clear on delivering Shakespeare’s text despite the deliberate lack of vigor. It sounds contemporary, easy to understand, and follows the intention of the characters behind the lines (which with Shakespeare sometimes might seem vague). The same goes for the other cast members. This makes the production's nearly four hours all engaging and accessible.