Written and Performed by Romy Nordlinger; Directed by Lorca Peress 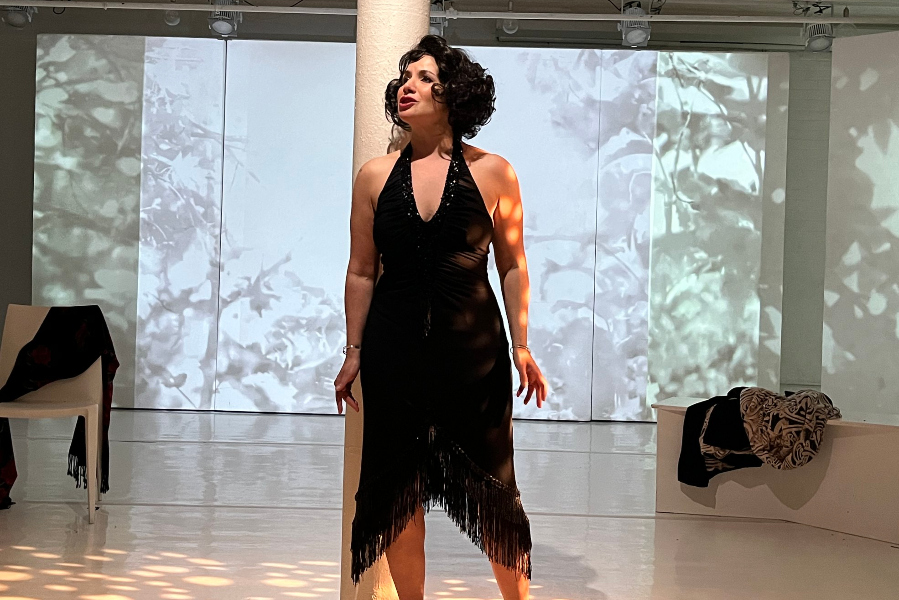 Legendary in 1920s cinema for her groundbreaking career, salacious personal life, and stark public downfall, the Russian-born actress and filmmaker Alla Nazimova remains largely forgotten in our popular consciousness. Yet, beneath this obscurity lies a fascinating and complex figure: a multi-hyphenate artist and businesswoman, Jewish immigrant and Hollywood icon, early feminist and LGBTQ+ advocate, Nazimova defied neat categorization and her era’s norms alike. In her one-woman show Garden of Alla: The Alla Nazimova Story, actor-playwright Romy Nordlinger draws Nazimova from history’s silence, resurrecting the famed artist and her story for today’s audiences.

As the charismatic Alla, Nordlinger guides us in retrospect through Nazimova’s meteoric rise to, and fall from, fame. Born in Russian-occupied Crimea to an absentee mother and tyrannically abusive father, Nazimova found refuge and opportunity in her artistic pursuits, first as a young violin prodigy and later as an emerging star of Stanislavski’s Moscow Art Theatre. When her career led her to America, Nazimova rose within New York’s theatre scene, from the Lower East Side’s Yiddish stages to a lucrative multi-year contract with Broadway’s Shubert Organization, the latter of which granted Nazimova her own theater on 39th Street and 7th Avenue (now a parking lot).

When her bisexual affairs and pushback against second-rate commercial roles bred friction with the Shuberts, Nazimova moved to Hollywood, achieving fame as the era’s highest-paid silent movie actress, launching her own production company, and writing, directing, and producing films under the male pseudonym “Peter Winters.” Masking her sexuality with a “lavender marriage” to British actor Charles Bryant, Nazimova’s “Garden of Allah” mansion on Sunset Boulevard became an epicenter of Hollywood’s social and queer scenes, known as much for its star-studded parties as for her lesbian “sewing circle” gatherings and guests’ sordid affairs. The outcry against her 1926 movie Salome, a sensuous, Wilde-inspired art film, brought about her personal and financial ruin, forcing Nazimova to retreat from the public eye, sell her mansion, and live out her final days as a renter in her former home. Nonetheless, Nazimova’s impact endures, her work and influence inspiring such artists and intellectuals as Tennessee Williams, Eugene O’Neill, Dorothy Parker, F. Scott Fitzgerald, and more.

Nordlinger breathes life into hazy legend, imbuing Nazimova with an earthy sensuality, indomitable will, and clear passion for the art, people, and places that sustained her. Nuanced and thoughtful, her performance displays a clear reverence for Nazimova’s life and character, highlights the story’s parallels with the struggles of today’s marginalized groups, and honors the resilience and creativity of artists throughout the ages. Blending classic film clips, historical photography, and stylized videoscapes, Adam Burns’ projections merge seamlessly into TheatreLab’s white walls to immerse us in Nazimova’s memories. Similarly, Riva Fairhall’s lighting underscores instances of violence and scandal, or evokes the wintry isolation of Nazimova’s childhood and dappled warmth of her Edenic Garden. Clusters of cabaret tables, and pre- and post-show music by jazz trio Les Trois Gitans, also nod to the show’s 1920s setting and the performative undercurrent of Nazimova’s life.

By bringing Nazimova’s story to the stage, Nordlinger not only gives worthy tribute to a talented-but-forgotten artist, but speaks to the deeper truth of our shared ability to transcend limitations, craft our personal narratives, and find joy, meaning, and hope amidst adversity. As such, Nazimova’s tale holds relevance across time and circumstance, and stands as a victory for the tales, and people, unfairly forced to silence. If, to quote the show, “an artist is only dead when the last person to remember them dies,” Garden of Alla circumvents this fate, ensuring that Nazimova’s name, and spirit, will live on.

(Garden of Alla: The Alla Nazimova Story plays at TheaterLab, 357 West 36th Street, 3rd Floor, through June 26, 2022. Performances are Fridays and Saturdays at 7:30, Sundays at 5. Proof of vaccination and masks are required. The running time is 70 minutes with no intermission. Tickets are $25-$40; $15 for students. For more information, visit theaterlabnyc.com/garden-of-alla/.)