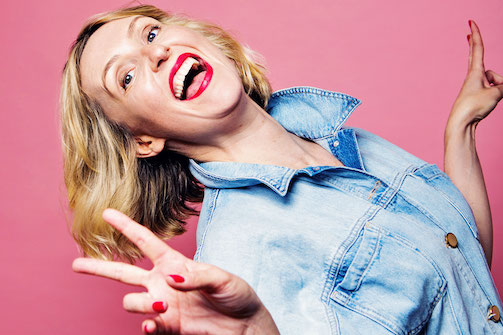 It's been a rough few months...or perhaps a rough couple of years. Just when we thought it was safe to return to our normal pre-pandemic lives, Omicron sent us back indoors. We could all use a laugh or two, which is why Eleanor Conway: Vaxxed and Waxxed (originally performed in Conway's native Britain) seems to be the perfect show for such times when our hope and optimism may be wearing thin.

Conway opens up by asking the audience what she should see while she's visiting New York City. She then laments "This is a Democratic liberal city. What could be more liberal than fucking a minority?… I wanna feel regret again. I miss it!" Conway later talks about how as a demographic, straight women are the least likely to achieve orgasm during sexual intercourse, and as an explanation for this dissatisfaction she gives a break down on how much time straight men spend on oral sex versus penetration. She energetically speeds through such laugh-inducing anecdotes as her experience on a sugar daddy website and a sexual partner with a particularly foul smelling penis.

As a performer Conway has ceaseless amounts of energy, jumping and leaping across the stage as she amps up the audience. (This is a nice change of pace from many current New York stand-up comics who rely on morosely delivered dry humor). Conway frequently uses audience interaction as a means to maximize engagement, but never embarrasses or laughs at her audience members the way others do. Rather, her warm and personable style makes you feel as though you were drunkenly discussing your sexual history with a close friend over cocktails. As a storyteller, Conway has a knack for finding the most amusing details in unpleasant sexual encounters and knows how to deliver a punchline. Her frequent use of movement also helps her to create a scene.

With a world full of crises and uncertainty, a Sunday evening viewing of this production was a much needed opportunity to laugh away the trauma. If you're looking for a reason to laugh (along with some well-placed social commentary), I suggest you jump at the chance to see this show (or any of Conway's other stand-up performances) while we're still lucky enough to have her on this side of the pond.