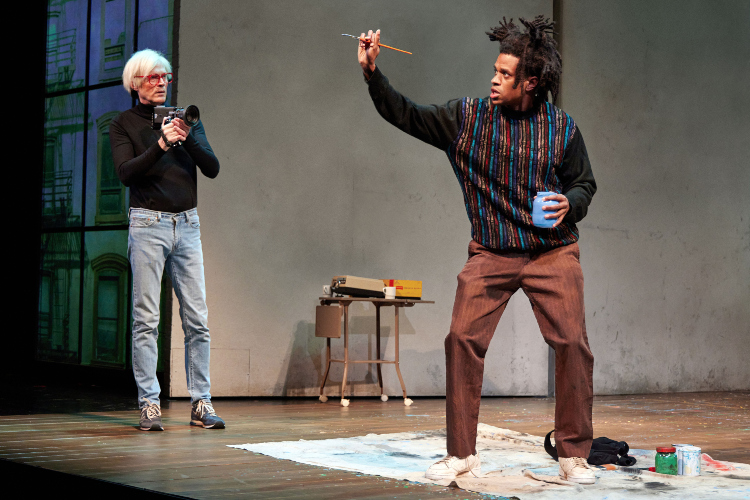 Paul Bettany and Jeremy Pope in The Collaboration. Photo by Jeremy Daniel.

What do you think about when you hear the names Andy Warhol and Jean-Michel Basquiat? Possibly fame, fortune, glitzy New York living, and all the self-confidence in the world. However, in a time where, according to Warhol, everything is surface and everyone will be famous (or perhaps exploited) for fifteen minutes, are even the artists happy? The Collaboration, written by four-time Academy Award nominee and double BAFTA winner Anthony McCarten, directed by Kwame Kwei-Armah, and coming from a run at London’s Young Vic Theatre earlier in 2022, brings us back to the gritty, downtown art scene of 1984. The audience enters and is treated to a DJ spinning ‘80s music, a disco ball, and Duncan McLean’s projections of dozens of Basquiat’s works. But once the play begins, we are called on to imagine the art these characters are creating; instead, the focus shifts to their inner drives and inevitable conflict.

The 56 year-old Andy Warhol (Paul Bettany) wears his trademark silver wig as he speaks with agent Bruno Bischofberger (Erik Jensen) about the up-and-coming, Brooklyn-born Jean-Michel Basquiat. Looking at Basquiat’s explosive, graffiti-filled art, Warhol, lately known for his mass-produced, silk-screened portraits of Marilyn and Elvis, seems afraid of the younger painter. Still recovering from being shot by Valerie Solanas several years earlier, and perhaps finally starting to understand the accusation that he exploits others, Warhol has further retreated behind his camera, documenting the creation of art yet, according to Bruno, very much needing to move forward. When Bruno suggests a collaboration with Basquiat, Warhol pauses and asks “What is a collaboration?”

When Warhol then meets the more relaxed Basquiat (the superb Jeremy Pope), the latter suggests they listen to some fusion-era Miles Davis. Warhol, utterly confused, has a hard time painting, or even tracing the outline of one of his typical industrial logos. Basquiat considers him the whitest person he’s ever met. Warhol asks if Basquiat is still a junkie. Basquiat asks about Warhol’s love life, still a touchy subject during the AIDS epidemic. They by no means trust each other, yet find great comfort working together.

Act II shifts to the eve of their famous show—the one with the poster depicting the two artists wearing boxing gloves. Maya (Krysta Rodriguez), Basquiat’s former lover, knocks on the door of Basquiat’s studio, to find Warhol working by himself. Maya needs some money from Basquiat, who is out visiting a friend in the hospital. Later, as Basquiat returns with some devastating news, the divide between the two artists deepens. Warhol will never be harassed for the medium or location of his art-making and will never be racially profiled by the police. Here, Pope acts Basquiat’s not-so-secret heroin use to perfection, portraying an artist who, channeling cultural beliefs and chemical reactions, believes he can bring the dead back to life through art. Hopefully this view will overtake Warhol’s belief that once an artist has a “brand,” they cease to exist.

McCarten’s clever psychological writing rolls fudges time a bit (the brutal police murder of Michael Stewart, actually happened in 1983), fusing events seamlessly together to heighten the tension. There are also references to another person Basquiat admires, the contemporary artist Julian Schnabel (who later directed the 1996 film Basquiat). In real life, both Warhol and Basquiat were nearing the end of their careers (and their lives). Kwame Kwei-Armah’s moving direction gives us Basquiat feverishly at work, staring into the fourth wall, ignoring Warhol, who films everyone hoping they will ignore him. Wigs, so meaningful to Warhol, are artfully crafted here by the team of Karicean “Karen” Dick, Carol Robinson, and Tony Kurzman. How fitting that the wigs augment the face of the masterful Paul Bettany, known among other things for superhuman roles in Marvel movies. Also crucial to this production is Deborah Hecht’s dialect coaching, which brings Warhol pleasantly into neutral. All of this takes place in loft-like sets designed by Anna Fleischle, artfully disordered and spacious enough for the audience to construct this world in their minds.