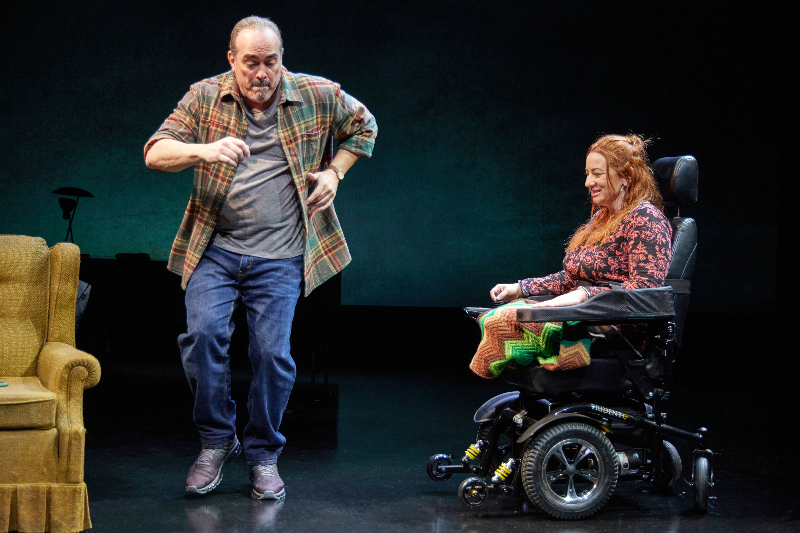 BOTTOM LINE: The brilliant Broadway debut of this Pulitzer Prize-winning play is not to be missed.

"Self care" is a concept popular the world over for encouraging people to actively work on their own individual well being. Far less attention is paid to caretakers—the people who provide care for someone else who is dependent upon them. This type of care is not preached about in social media or featured in streaming programs. It is not glamorous or sparkly—it is arduous and labor-intensive for all involved. And while there is doubtless anguish and pain, this frustration lends itself to moments of deep vulnerability and humanity. These concepts are explored beautifully in Martyna Majok’s Pulitzer Prize-winning Cost of Living, which is finally making its Broadway debut after playing at Manhattan Theatre Club's Off Broadway space in 2017.

Cost of Living centers around two different couples and the complex and nuanced relationships between each pairing. Eddie (David Zayas), an out-of-work truck driver, is faced with the care of his wife Ani (Katy Sullivan), who recently lost her legs in a car accident. As a couple that was already estranged and living separately, tensions are rife between them when the accident occurs. Zayas and Sullivan make wonderful foils for each other. Matching warm words with sharp barbs, tears of laughter are often accompanied by tears of grief. The violence of being maimed must be devastating, and that certainly comes through here, but in the careful and skilled hands of Zayas and Sullivan, these two broken people find small ways of healing through breathtaking scenes of tenderness and grace.

Directly opposite this struggling former couple are two strangers contemplating an intimate employment. John (Gregg Mozgala), a white man with cerebral palsy, interviews Jess (Kara Young), a black first-generation woman, for the open position of the person who will bathe and groom him every morning. While both share the same Ivy League background, the economic class difference is profoundly felt: John has an abundance of wealth while Jess works multiple shifts as a bartender to make ends meet. While they may be on opposite ends of the financial spectrum, both recognize and respect the fierce pride and independence that radiate from each other. Mozgala is uproarious as John, exuding the condescension and smugness of the upper class with effortless panache. He is matched by the enchanting Kara Young, in a dazzling performance that can only solidify her star-power after last season's Clyde's. During what could be considered the ugly parts of caretaking, Young’s luminous performance is a jolt of pure electricity and brilliance in a world that can often feel so dark. 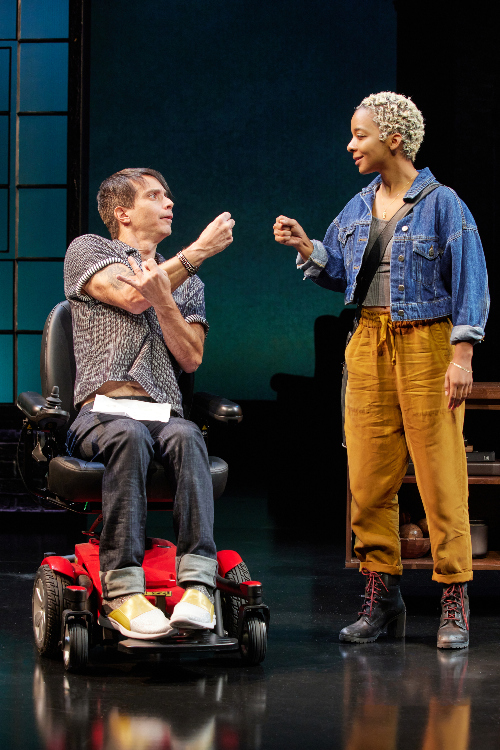 Also important is the authentic casting of Gregg Mozgala and Katy Sullivan, both actors with physical disabilities (both have been with the piece since its 2016 world premiere at the Williamstown Theatre Festival; Young and Zayas are new for the Broadway production). The importance of having disabled actors portray disabled characters on a Broadway stage cannot be understated. The genuine representation of these actors brings so much to an already rich production.

Majok’s choice to primarily write scenes between two people proves effective, as it allows a deep intimacy between each pair to develop without distractions. This type of intimacy not only reflects real-life situations, but it also finds a perfect match with director Jo Bonney, who excels in compassionate storytelling. Supported by the seamless scenic design of Wilson Chin and the meticulous sound design of Rob Kaplowitz, Bonney has masterfully crafted a world around some of the most difficult and the most beautiful parts of the human condition, exposing what it really means to be a care-taker and a care-giver.

(Cost of Living plays at the Samuel J. Friedman Theatre, 261 West 47th Street, through October 30, 2022. The running time is 1 hour 50 minutes with no intermission. Performances are Tuesdays at 7; Wednesdays at 2 and 7; Thursdays at 7; Fridays at 8; Saturdays at 2 and 8; and Sundays at 2. Tickets are $59-$159 (with service fees) and are available at telecharge.com or by calling 212-239-6200. $35 rush tickets are available; for more information visit manhattantheatreclub.com.)