Chasing the Tides, or Exposure 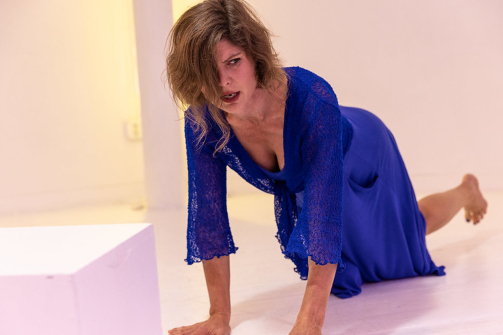 Matilda Woods in Chasing the Tides, or Exposure. Photo by Maria Baranova.

BOTTOM LINE: Steeped in memory, movement, and aquatic motifs, one woman unpacks a life lived through others’ eyes.

As social creatures, our relationship to others, and to our environments, exists as a quandary of human existence: consciously or unconsciously, we shape ourselves to fit our surroundings, often to the point that we lose sight of what is truly “ours.” For women in our culture, this double-consciousness is all the more pronounced, as objectification and self-curation become survival tactics in a patriarchal world. Pseudonymous writer/performer Matilda Woods’ solo show Chasing the Tides, or Exposure, confronts these paradoxes, with movement and metaphor guiding its heroine’s quest for meaning.

Befitting a show centered on the closeness and pressure of outside scrutiny, Chasing the Tides is staged with three-quarter seating in TheaterLab’s gallery space, a configuration which breeds both intimacy and display as Woods shares her tale. Through a scattered, semi-autobiographical narrative, she recounts the events that formed a lifelong journey of revelation, concealment, betrayal, and connection. From the Arizona deserts and seaside vacations of her youth, Woods spent much of her life adapting to similarly tumultuous interpersonal climates, particularly the influence of her mentally unstable, beauty-obsessed mother, whom she alternately regarded as confessor, judge, and idol. Pushed by her mother into modeling and early sexual encounters, and later repeating similar dynamics in her career and love life, Woods became acutely aware of the world’s response to her body and presence, priding herself on the ability to chart, navigate, and respond to others’ emotional “algorithms” with the precision of an oceanologist mapping the tides. While this skill carried her through harsh circumstances, it severed her from herself, leaving her without access to her truth, subject to exploitation, and at the mercy of her unhealed trauma.

Intense, mercurial, and compelling, Woods’ dive into her inner world embodies the multifaceted and often contradictory nature of survivorship. Seeking clarity but bred on gaslighting and self-abasement, she questions her role in the events she faced, particularly ones rife with dueling desires (sexual attraction and repulsion; love, fear, and hatred of her mother; her drive for connection and capacity to sabotage or flee from it). Her relationship to the world is similarly fraught: hyper-attuned to outside perception, Woods found power in her ability to control and direct others’ gaze and become whatever was asked of her, even when doing so left her dependent on outside forces to shape her life and identity.

True to the theme of internal-external disconnect, the play’s trappings often convey the emotions Woods struggles to access. Interspersed throughout the story, Woods’ movement sequences reflect her inner tension, vacillating between poised direct address and deliberate presentation to frenzied motion or crumpled agony. The power and burden of self-objectification reaches its crux in a dance sequence recalling Woods’ brief stint as a peep-show performer: beginning as a fierce and commanding self-display, over time the presentation becomes mechanical, dehumanizing, and brutal as she doles out sexiness on command. Recordings of whispered confessions, surfacing memories, or absorbed judgements give voice to Woods’ subconscious, literally and figuratively interrupting her attempts at linear narrative or factual recitation. Jay Ryan’s lighting runs a similar gamut of harsh truth and gentle appeal, ranging from searing and sterile full-white to ambient sunset washes.

From Julian Evans’ tidal soundscapes, to Woods' flowing blue garments, to memories centered around pools, lakes, or oceans, the motif of water as a malleable, emotional, and archetypically feminine force appears throughout, counteracting that which is curated, arid, rote, or mathematical. More pointedly, Woods’ and others’ attempts to tame or predict this energy prove as futile as the constant effort of managing our own image or others' reactions, and just as conducive to frustration and disconnect. As the piece reveals, in our quest for self-knowledge, we can chase, but never fully capture, the tides of emotion, memory or truth: we can only face them head-on, and in doing so, reclaim our lives and stories.

(Chasing the Tides, or Exposure played at TheaterLab, 357 West 36th Street, 3rd Floor, from December 9-18, 2022. The running time was 90 minutes with no intermission. Performances were Thursdays through Saturdays at 7:30 and Sundays at 5. Tickets were $12-25. For more information, visit blessedunrest.org.)