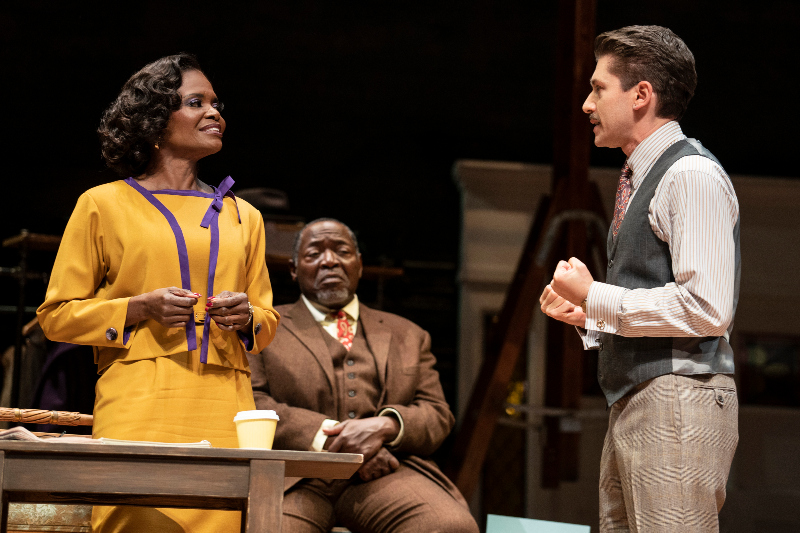 BOTTOM LINE: A play written in the 1950s gets a long overdue Broadway production and proves itself worthy of the honor, in spite of some directorial flaws.

A wave of new plays by Black writers is sweeping over Broadway this fall (including Clyde’s, Chicken and Biscuits, the already-closed Pass Over and the returning Slave Play), but coming with it is a work that’s hardly “new”—Alice Childress’ Trouble in Mind, a hit off-Broadway in 1955. The backstage comedy, in which a Black actress finds herself increasingly frustrated with her role in a “liberal” antiracist drama, was headed for the Great White Way until Childress was asked to make changes to the script to make it more palatable for mainstream audiences, which she refused to do. Yes, you read that correctly: a play about the cluelessness of commercial theatre producers was derailed because of the cluelessness of commercial theatre producers.

Trouble in Mind’s Broadway debut may have been too long delayed (Childress died in 1994), but time certainly hasn’t passed it by. Despite now being a period piece, its portrait of prejudice and hypocrisy in the supposedly progressive theatre community has never been more relevant. Stage diva LaChanze, best known for her star turns in musicals (Once on this Island, The Color Purple), plays Wiletta, a showbiz veteran who’s gotten used to shrugging and smiling—through gritted teeth—when asked to do ridiculous and stereotypical scenes. She’s prepared to do it again for the next job, an “important” drama about racial violence in the South. But her director, Al Manners (Michael Zegen of The Marvelous Mrs. Maisel), a white Hollywood type determined to prove he can do serious theatre, pushes her to dig deep and find the “firm texture of truth” in her performance. He comes to regret his decision when Wiletta starts asking whether it’s even possible to act truthfully in a play dripping with racist condescension. The other Black actors in the cast aren't thrilled with Wiletta's new perspective either: "I know what's right," says Millie (Jessica Frances Dukes), "but I need this job."

I wish that real-life director Charles Randolph-Wright had taken a note from his onstage counterpart and allowed more of the “texture of truth” into this production. Instead, he’s encouraged the cast to play the comedy broadly, perhaps in order to underscore the absurdity of the milieu in which it’s set. But Childress’ text needs no help making racism seem absurd; what it could have used more of is a subtler, more bitter tone, making Willetta’s artistic and political awakening deeper and more satisfying.

Despite the production’s missteps, it still gives us some memorable moments, many of which come courtesy of the legendary Chuck Cooper as Wiletta’s castmate Sheldon—side-splittingly funny in one scene and heartbreaking in the next. In his performance we see glimpses of Trouble in Mind’s true potential as both sharp comedy and timeless social commentary. Broadway might finally be ready for Alice Chlidress, but the jury’s still out on whether it deserves her.