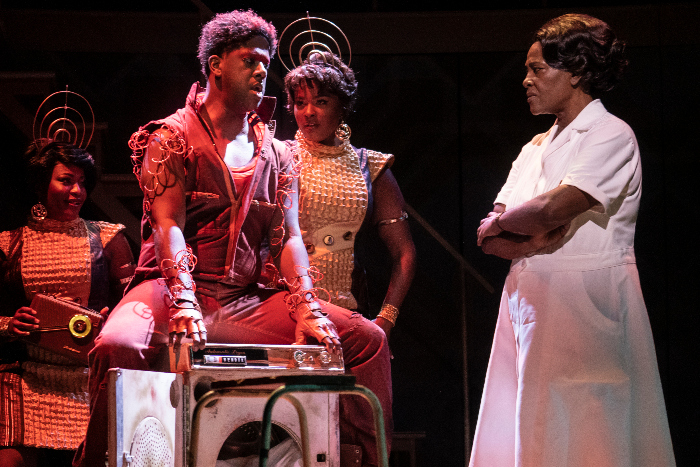 BOTTOM LINE: Caroline, or Change is a masterpiece, and Michael Longhurst’s production is a triumph.

It’s kind of amazing how prophetic Caroline, or Change continues to be. With every restaging I see (there have been two in New York since the original, both Off Off Broadway), new elements jump to the foreground. Back in 2010, the opening lines (there ain’t no underground in Louisiana/There is only underwater) recalled the recent devastation of Hurricane Katrina. In early 2019, I was struck by echoes of political discord and arguments around the best strategies for social change. While these themes are still relevant, director Michael Longhurst has opted in this first Broadway revival to spotlight the toppled Confederate statue that otherwise haunts the background, a nod to the dismantling of so many real monuments over the past few years. Oh, and there’s also reference to a black female President. Seriously, is Tony Kushner psychic?

Indeed, one could write a dissertation about this show (trust me). Lest I paint a picture of something that’s overly intellectual, it’s worth noting that Caroline, or Change has a (deceptively) simple plot. Caroline Thibodeaux (Sharon D Clarke), a black maid in Lake Charles, Louisiana, works for Stuart Gellman (John Cariani), a recently widowed Jewish clarinetist with an eight-year-old son, Noah (Gabriel Amoroso at the performance I saw). After his wife died, Stuart married Rose Stopnick (Caissie Levy), who Noah “hates.” In an effort to teach Noah to “mind his money,” Rose tells Caroline to keep the change she finds in his pockets when she does the laundry. Caroline, a divorcee with three kids at home (and another off in Vietnam), grits her teeth and agrees to play along, since her $30 weekly salary just “ain’t enough.” Meanwhile, Noah (who idolizes Caroline) secretly thrills at this new chance to play savior. And then comes the Chanukah party…

Such minor “domestic tragedies” might seem small potatoes, so Kushner and Tesori throw in additional characters—not quite the kitchen sink, but the Washing Machine (a delightful Arica Jackson), Dryer (Kevin S. McAllister, who also plays the Bus), Radio (the tight trio of Nasia Thomas, Nya, and Harper Miles), and The Moon (N’Kenge, who sings heavenly). But this isn’t a cheesy gimmick—in every production I’ve seen, these inanimate characters become deeply human witnesses to (and narrators of) the “consequences unforeseen.” And like everything else in the show, there is much beneath the surface (literally—one interpretation is that these characters are the spirits of the slaves who died working the Louisiana land).

It’s easy to geek out on Tesori’s musical complexity and Kushner’s deep dive into symbolism. Sharp listeners will pick up on how one musical theme gets passed off to someone else (a cultural exchange that set and costume designer Fly Davis cleverly echoes in her designs—see for instance the Gellmans’ costumes for the Hanukkah party, compared to the Radio’s final look). Even a cursory glance will reveal that the titular “change” has many meanings, and don’t get me started on the bleach cup as capitalistic whitening agent. Which is all to say, Caroline, or Change is a musical that definitely benefits from repeat encounters. If you’re new to the score, I might suggest giving it a listen (or three) before going.

Caroline, or Change debuted on Broadway in the same season as Wicked and Avenue Q. And one reason it didn’t “do as well” initially is because it is a show that withholds emotion—like Caroline herself, the musical doesn’t care about giving us what we’ve been trained to want from musical theatre, like big musical numbers with rousing climaxes. This isn’t to say it’s a cold musical or that the music “isn’t satisfying” (as some critics have argued). The more times you listen, the deeper Tesori’s music will burrow into your very being. But this certainly isn’t a show that spoon-feeds a clap-happy response.

And to my mind, this is where director Michael Longhurst’s diverges the most from George C. Wolfe’s original production, by attempting to squeeze out as much emotion as possible. Conscious that this isn’t an “easy show,” especially for new viewers, Longhurst seems to be working hard to meet the audience halfway. He does this in part through a “bigger” production—the current revival has more bells and whistles than the original (which was a transfer from the Public Theater). There’s a rotating stage, a house that splits, a flying moon, and many other surprises which I won’t spoil here. And perhaps because of this staging, Tesori’s music seems to swell more in key moments. Longhurst also encourages more interaction between the humans and non-humans, resulting in a production that is at times funnier, sadder, and even more erotic then previous ones I’ve seen. But whereas with lesser material such an approach might come off heavy-handed, this is Caroline, or Change, so Longhurst’s approach—heightening the emotion, going for clarity over ambiguity—works well, for the most part. Sure, there are one or two moments where he just steps over the line into “here’s what to feel and think” territory, but these are minor, minor quibbles.

Musical theatre nerds will no doubt rush to debate the differences between this cast and the original, indelible Broadway ensemble. Perhaps the most strikingly new interpretation is Caissie Levy’s Rose, who is more sunshiney 1960’s housewife, less angst-ridden stressball, as compared to Veanne Cox. But if a more nonchalant Rose risks becoming less sympathetic, have no fear—Levy is careful to make sure Rose isn’t actually as clueless as she seems. As Stuart, John Cariani may not have the vocal gravitas of David Costabile, but man, can he play a mean clarinet. Whereas Wolfe’s original production used one actor as Noah, this production alternates three boys (Amoroso switches off with Adam Makké and Jaden Myles Waldman). While I imagine these interpretations will all be subtly different, I enjoyed Amoroso’s take on the role. Noah is essentially a young Tony Kushner, and Amoroso has fun adding some extra touches (with the help of Levy) that gesture to the character’s gay future. And as for Rose’s father Mr. Stopnick, I don’t think Chip Zien has been this perfectly cast since Falsettos.

All of the non-human characters are delightful, but for me, the stand-out is Kevin McAllister’s Dryer/Bus. It’s no small feat to take on a role originated by Chuck Cooper, and McAllister delivers, and then some. As the Dryer, McAllister has a ball with taunting Caroline; his sexual energy here foreshadows a later scene when the actor appears as Caroline’s ex-husband in a flashback. And then as the Bus, the harbinger of death who literally and figuratively splits the house apart, McAllister lets everything go. It’s one of the most thrilling moments in a show filled with highlights.

Caroline’s friend Dotty Moffett is only in three short scenes, but that’s plenty for Tamika Lawrence to build on. While I’m not sure I believed this Dotty and Caroline were ever BFFs, I certainly got the sense that Dotty truly believed in Caroline more than she did herself. Caroline’s young sons Jackie and Joe (Alexander Bello and Jayden Theophile) have some fun tricks up their sleeves for the Act 1 closer “Roosevelt Petrucius Coleslaw.” And Caroline’s daughter Emmie is arguably the emotional and moral center of the show; it’s the role that won the original production its sole Tony Award (for Anika Noni Rose). So Samantha Williams has big shoes to fill, and fill them she does. Whereas Rose played Emmie as fairly young and naïve, gradually growing into her own by the final song, Williams is more assured from the beginning. I wouldn’t have expected this to work as well as it does, but it allows Emmie to match the heightened emotion of the adult characters.

And finally, there’s Sharon D Clarke as Caroline, a role for which Tonya Pinkins should have won a Tony (sorry not sorry Idina Menzel). Pinkins reportedly had a significant hand in developing this role, especially when it comes to “Lot’s Wife,” the show’s anti-11 o’clock number. So Clarke wisely takes Caroline in a completely different direction. Whereas Pinkins’ Caroline was perpetually exhausted, long-resigned to her life, Clarke’s is quicker to anger, more confrontational. Her fights (with Rose, Dotty, Noah…Caroline fights with everyone) are therefore hotter, even somewhat dangerous. It is perhaps a showier performance, but one no less rooted in truth.

On walking out of the theatre, I heard two men in front of me talking about how “they could have trimmed some of Act 1,” a sacrilegious comment if I ever heard one. But it goes to show how even those who might think they “get” this musical…maybe don’t. Caroline, or Change is a show that continues to surprise, one in which even the most seasoned theatergoer will find new meaning. It’s taken some time for Caroline, or Change to move from inscrutable oddity to musical theatre classic, but it’s finally getting there, something that should be helped by a revival that deftly manages to be more crowd-pleasing, but without ever pandering. As Emmie sings in one of the most inspiring musical finales I can think of, “change come fast and change come slow/but everything changes.” Glory Hallelujah to Kingdom Come.

(Caroline, or Change plays at Studio 54, 254 West 54th Street, through January 9, 2022. The running time is 2 hours 30 minutes with one intermission. Proof of vaccination and masks required. Performances are Tuesdays at 7, Wednesdays at 2 and 8, Thursdays at 7, Fridays at 8, Saturdays at 2 and 8, and Sundays at 3. There is some schedule variation around the holidays. Tickets are $59 - $250. For tickets and more information visit roundabouttheatre.org.)