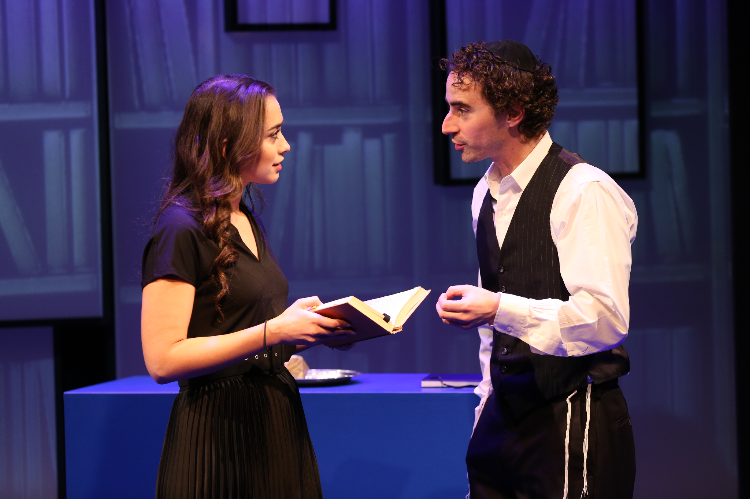 Lauren Annunziata and Jeremy Rishe in The Sabbath Girl. Photo by Carol Rosegg.

You've likely heard this story before: A lonely 30-something man meets a woman he believes is out of reach and begins obsessing about her. In this case, the man is Seth (Jeremy Rishe), a 32-year-old divorced Yiddish scholar, who has left the confines of his stifling Orthodox Jewish community in Riverdale for the more secular Upper West Side. Nonetheless, he continues to work in the family business, Konig's Knishes, alongside his extremely traditional sister Rachel (Lauren Singerman). Her goal? To find him a Nice Jewish Girl, and soon.

While Seth is not opposed to this idea, he isn't exactly jumping at it either. This only makes Rachel more determined. She connives. She wheedles. When all else fails, she uses guilt, as if the specter of their dead father can force her kid brother into compliant matrimony. It almost works—until Angie (Lauren Annunziata) enters the picture.

On a stiflingly hot Friday evening, Seth knocks on his neighbor's door only to find that Mr. Lee, the previous tenant, has moved out. The new resident is comely Angie, a hard-working Italian-Catholic gallery manager. After an awkward exchange, Seth confesses that Mr. Lee had often helped him on Shabbos (the Sabbath) by doing things that observant Jews are not allowed to do—turning on the A/C, lighting the stove, or replacing a light bulb. In short order, Angie becomes Seth's Shabbos Goy, the non-Jew who helps Seth juggle religious restrictions with the necessities of modern life.

Sparks quickly fly, and it doesn't take long for lust to triumph. And herein lies the crisis. Does Seth have the wherewithal to go for what he wants, or will community and family pressure win? Angie, meanwhile, has her own crises to deal with, not the least of them persuading Blake (Ty Molbak), a young, up-and-coming photographer, to choose her gallery for his first New York show. She's under a lot of pressure, made worse by her loving Nonna's (Angelina Fiordellisi) periodic appearances at both her apartment and her job. Nonna is as direct as she is persistent, asking probing questions about her beloved granddaughter's love life. After all, the clock, as they say, is ticking.

It's a familiar set up, and while there are many laughs throughout, the humor is predictable, the characters stock. It's still enjoyable, but the comfort is in the iteration of a frequently told tale. Indeed, the play feels more like putting on a favorite pair of jeans and a well-worn sweatshirt than experiencing the joy of a new, and perhaps less comfortable, outfit.

Nonetheless, The Sabbath Girl rises above thanks to stellar acting. Lauren Singerman is particularly wonderful as Seth's disapproving sister Rachel, and both Annunziata and Rishe are compelling and earnest. In addition, Yana Birykova's projection design allows the action to move seamlessly from scene to scene--quickly transforming Seth's book-filled apartment into Angie's art gallery, and from her barely decorated one-bedroom into a trendy wine bar for an assignation with Blake.

All told, The Sabbath Girl is a sweet, light confection with few surprises, an easy-to-digest, soothing and satisfying morsel of romantic frivolity.