By Tristan Bernays, based on the novel by Mary Shelley; Directed by Timothy Douglas 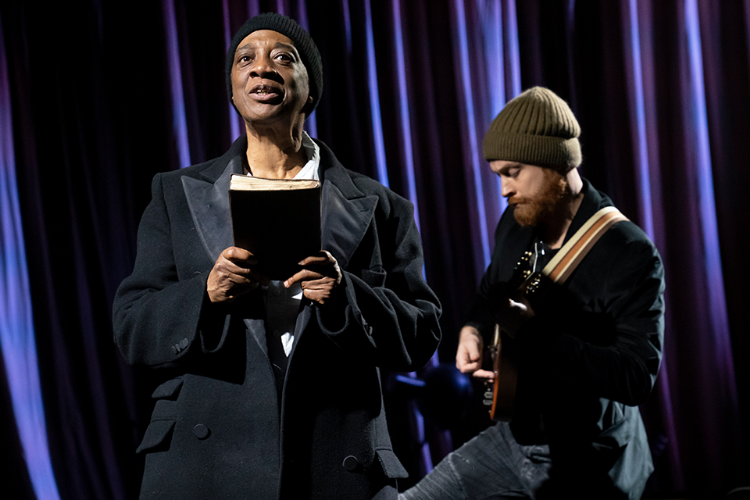 BOTTOM LINE: Frankenstein, told from the creature's point of view, asks "Who is the real monster?"

Before there was language, there was a wonderful world of sounds. Tristan Bernays reminds us of that innocent state of mind in the beginning of his Frankenstein, which currently runs at the Classic Stage Company (in repertory with Kate Hamill’s Dracula). This chamber adaptation of the 1818 novel by Mary Shelley is told, if not totally from the perspective of the infamous Creature, then from that of a very sympathetic observer, who strives to understand the psyche of the “wretched thing” never even given a name by its creator.

Bernays wastes no time on the novel's framing story with Captain Robert Walton or on Victor Frankenstein’s university years. He goes straight to the scene of the Creature (Stephanie Berry) coming alive on a massive table (minimalist set design by John Doyle). Dyane Harvey-Salaam’s movement direction is attentive to every micro-gesture. You can almost feel the pain of the malformed “monster” coming alive, as Berry tries to conquer its limbs, every twist and turn accompanied by an excruciating shriek.

The other actor on stage, Rob Morrison, portrays nearly every other character and plays a few different string instruments. The entire play is beautifully laced with original music. Particularly in the beginning, before the Creature first meets humans, the music and various sounds—produced by objects and Berry’s vocal cords—carry the narrative. This gentle scene in the woods might seem slow or lengthy; I spotted a few people in the audience dozing. However, it was my favorite scene in the entire show. Director Timothy Douglas gives the audience a rare opportunity to look into the inner world of somebody who is not capable of full verbal communication and is unversed in the protocols of society. Unaware, we bond with the creature—and some of us are even asked for an English lesson in a brief moment of audience interaction.

Learning spoken language and revealing himself to humans only brings the Creature the bitter disappointment of rejection. He then sets his mind on revenge toward his creator, thus propelling the horror plot. (Though played by a female actor, the Creature is referred to as male.) Berry alternately plays both Victor Frankenstein and his monster. Modern day costumes by Toni-Leslie James come handy, as the coat becomes the body of the Creature’s bride and the red scarf indicates who is playing Frankenstein.

Frankenstein poses a question, “Who is the real monster?” Although the Creature does escalate to the murder of innocents, the play urges us to take a step back and ask ourselves why. “I am alone in the entire world, unfriended and unloved!” he cries, trying to convince Frankenstein to make him a companion, an Eve. When his wish is not fulfilled, the Creature turns toward the only person he can communicate with and simply reflects back his creator’s hatred and fear. A full-length mirror placed onstage invites us to take an honest look at ourselves to see if we are not hosting any monsters of judgment, ignorance, or anger inside of ourselves.

(Frankenstein plays at Classic Stage Company, 136 East 13th Street, through March 8, 2020. The running time is 80 minutes with no intermission. Performances are Wednesdays and Thursdays at 7; Saturdays at 2 and 9; and Sundays at 6. Tickets are $82 - $125. Special two-show packages to Dracula and Frankenstein are $130. Tickets are available at classicstage.org or by calling 212-352-3101.)

The cast is Stephanie Berry and Rob Morrison.