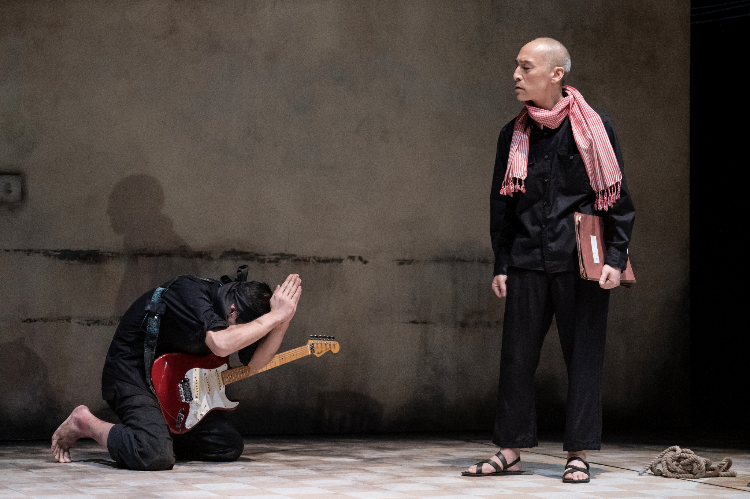 BOTTOM LINE: In the excellent Cambodian Rock Band, the modern-day trial of one man who was “only following orders” forces an entire nation to reckon with its past.

Not long ago, you might have shrugged off totalitarian, genocidal regimes as a thing of the past. But Cambodian Rock Band cleverly argues against this idea. This new play with music remembers how, from 1975 to 1979, the carefree lives of Cambodian citizens—in this case a group of musicians—were disrupted by the rise of the totalitarian Khmer Rouge regime. The story jumps back and forth between the twenty-first century, where several generations of Cambodians confront unspeakable truths.

Narrator Duch (Francis Jue) is an energized Cambodian man with a shaved head who looks like he is either very focused on his job or part of a rock band—or both. He appears amid the show’s Khmer-language musical numbers, which are performed by the band Dengue Fever. As the story progresses, we learn that Duch was second in command to Khmer Rouge dictator Pol Pot, and, in order to survive, interrogated and arranged for the execution of countless Cambodians at the infamous S21 Prison. Duch had formerly been a math teacher and, when thrust into this new role, enthusiastically obtained confessions by asking inmates to “show their work,” thus leaving a paper trail that led to his conviction 30 years later. While we know this up front, we mainly meet Duch through his appearances in the story of Chum (Joe Ngo) and his American-born daughter Neary (Courtney Reed) in scenes that take place in the 1970s and the 2000s.

Despite the efforts of her refugee parents to shield her from their traumatic past, Neary goes to work for an NGO in Phnom Penh. Her father suddenly shows up at her hotel room in April 2008, shortly before the Cambodian New Year (the time of year when, in 1975, the American army withdrew and the vicious Khmer Rouge seized power). Chum has been distant from his daughter, who in turn has not told him she is dating her colleague Ted (Moses Villarama), a half-Thai Canadian citizen, whom Chum taunts with Thailand's refusal to grant him refugee status in 1975. Neary and Ted also whisper about her discovery of a secret, unidentified 8th survivor of S21 prison

Eventually, the identity of said survivor is revealed. But do we believe any of the other narratives that make the second act so compelling, including flashbacks to Chum’s rock band recording their first (and only) album in 1975? The band members stayed in Phnom Penh until it was too late to flee the Khmer Rouge, bringing disaster to them and their families. From 1975-1979, Duch was tasked with destroying any Cambodians who could be intellectuals or agents of Western powers. Wearing glasses or playing a musical instrument might be reason for someone to go to prison. We see Chum pretending to be a banana seller so he can avoid Duch’s suspicion, and yet, the music he plays is something Duch the human being greatly prizes. For Chum to survive, he must make some choices that he might never be able to face, at least until he and Neary relive the events of “Year Zero.”

This production is of great cultural significance. On the one hand, Cambodian Rock Band is a fun show complete with rock music, Linda Cho’s groovy 1970s costumes and Takeshi Kata’s sets that evoke both the flashy side of Phnom Penh and the stark cells of the S21 prison. But this is also a show that has been actively cultivating a sense of community, with Asian American audience nights and a panel on intergenerational trauma across communities. Those who did not live through these events now have an opportunity to think about the rise of oppressive regimes, and how in totalitarianism, "whoever tells the story, tells the truth."

Under Chay Yew’s expert direction, the cast present characters in several stages of growth. Joe Ngo as Chum certainly comes across as completely different people in 1975, 1978, and 2008. While bonding with his daughter, he occasionally drops an unexpected cultural reference (“imma survivor. keep on surviving. i did not give up. i just work harder! i am gloria gaynor!”) while seeming like an affable immigrant dad with an authentic Cambodian accent. His transformation into a man with something to hide is worthy of praise.

Francis Jue as Duch amazes with his public persona of absolute certainty that would not be out of place in a show about McCarthyism, while in private moments, Duch tells us he has no certainty and hasn’t been able to sleep for decades. Courtney Reed as Neary similarly presents as having found all the facts, then quickly decides to seek visceral experience instead. Moses Villarama also brilliantly portrays Chum’s band mate, who by 1978 has landed in a complex ideological predicament. But even with all of this complexity, by the end of the show, you may be on your feet dancing. I bet that Lauren Yee’s five-year residency at Signature will bring more delightfully deep plays like this one.