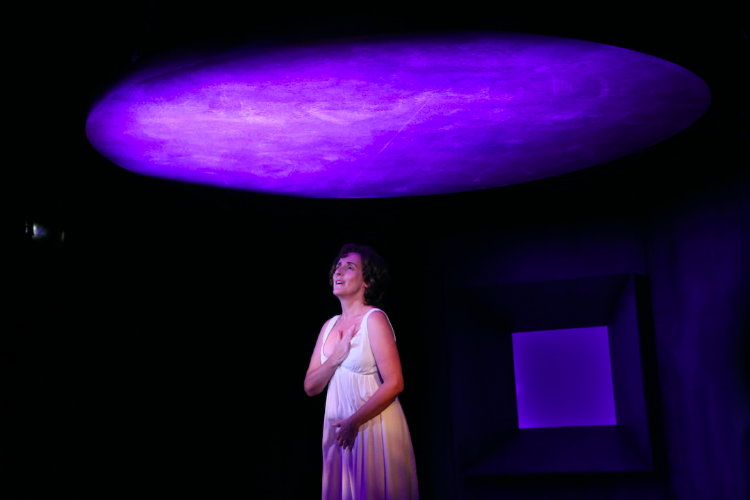 It’s challenging to critique a play adapted from the text of James Joyce’s 1922 novel Ulysses, because it feels like anything ever said about Ulysses has long been in print. Considered by many to be the greatest novel of the 20th century, the final chapter of Ulysses features a fifty-page soliloquy without punctuation. The stream of consciousness of Molly Bloom, Leopold Bloom’s sensuous and long-suffering wife, this final chapter is the stuff of doctoral dissertations and punk rock anthems. It’s also nearly impossible to skim through or casually read. Thank God for actor, writer, and producer Aedín Moloney!

In a role that seems impossibly tailored to her, Moloney lives and breathes Molly Bloom’s infamous agony and ardor. Even the tips of her toes move with grace and passion as she languishes along the curved grey bedroom of her row house home in Dublin. Moloney, a self-proclaimed Joyce enthusiast, has a deft ability to effortlessly change direction from one thought to another, however disjointed, and yet it all makes perfect sense. It's surprising that there's no choreographer listed, as Moloney's body language shifts so entirely to reflect each change of mood or thought, allowing her ache for respect and desire to be both visual and palpable. Moloney dives deeply into the well of the human condition, radiating honesty and vulnerability from her whole being. Like the iconic book it is adapted from, Moloney’s performance is, quite simply, a masterpiece.

Theatre may well be the best medium for adapting Joyce’s work—here, one of literature's most vivacious and passionate characters is able to not only speak, but to dance and sing to the rafters in a stunning Irish lilt. Though alone on stage, Moloney is aided skillfully by giants of the literary and musical world. Pulitzer Prize writer Colum McCann, and Cheiftans frontman Paddy Moloney (her father), have helped to adapt and score the piece respectively. Director Kira Simring also deserves praise, as well as lighting designer Michael O’Connor and sound designer M. Florian Staab. With their masterful direction and design, Moloney’s performance never once feels like just another one-woman show, but a theatrical tour de force. Just in time for Bloomsday, the Irish Repertory Theatre has made a performance to match the history books.