$30 for one performance
$50 for the double feature

Off Off Broadway, Immersive Theatre
Runs through 10.27.19
Governors Island House 404A, Colonels Row 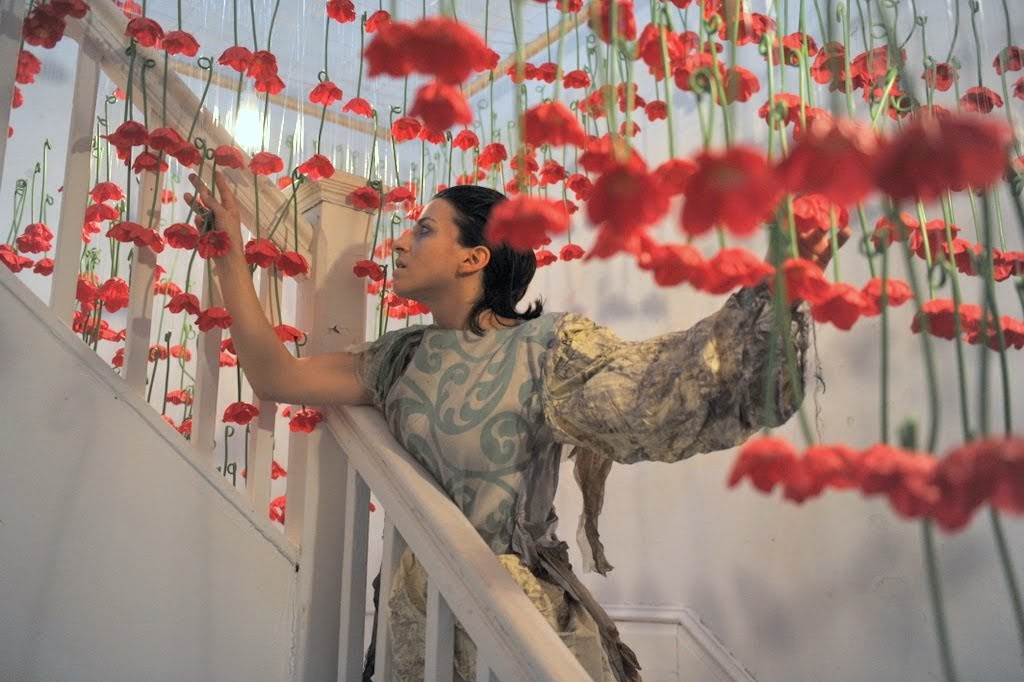 BOTTOM LINE: Water and memories guide us through a house’s history in this poignant immersive piece.

Malleable, omnipresent, and central to our survival, the element of water and the concept of memory share many traits, particularly in their capacity to connect us beyond the limits of time and circumstance. Set in a historic Governor’s Island row house, Exquisite Corpse Company’s Water, Water, Everywhere... explores the link between water and memory, introducing us to three sets of characters united by their shared home and connection to the water surrounding it.

Like several of its prior productions, Exquisite Corpse styles Water, Water, Everywhere... as a work of immersive promenade theatre, in which audiences absorb the story by following actors through the performance space. Upon admission, audience members receive color-coded keys, each denoting one of three narrative tracks—Ice, Fog, or Water—they will follow through the house and play. Emerging from behind the foyer’s patterned wallpaper, a house spirit named Enceladus (Anya Krawcheck) greets us, explaining that time within this building is fluid: past, present, and future not only overlap but interact within its confines.

Beginning in the present-day, we gather in the house’s parlor as adult siblings Johnny (Jorge Sanchez-Diaz) and Molly (Stephanie Orta-Vazquez) return to their childhood home with their elderly mother Ruth (Josanna Vaz), hoping the visit will jog the Alzheimer-stricken Ruth’s memories. When their initial efforts fail, Molly and Johnny travel through the house, hoping to call up recollections of their family’s former life. It is at this point that we divide into our designated groups, following Molly, Johnny, or Enceladus on their respective tracks as they encounter the house’s, and their own, memories.

By turns, our groups meet the house’s past and future residents, each existing simultaneously in the space’s non-linear temporality. In a not-so-distant future of catastrophic drought, “storm chaser” Fountain (Vanessa Lynah) takes shelter in the vacant building, living on harvested rainwater while concocting desperate conservation plans for the island’s endangered water supply. Through the house’s altered space-time conditions, Fountain makes contact with 1800s-era twins Theo (Varak Baronian) and Nora (Megan Ermilio). Stationed on Governor’s Island during its days as a naval base, Theo and Nora’s father has been tasked with building a piping system to channel fresh water from Brooklyn to the island’s residents. Alone in his absence but for their ailing mother and Enceladus (disguised as their housemaid “Elsie”), the twins eagerly befriend Fountain and plot to help her find the water she seeks.

Similarly, Molly and Johnny’s searches bring them face-to-face with the house’s more painful memories and their own struggle to confront the past. Witnessing scenes of childhood strife over their Coast Guard father (Ignacio Garcia-Bustelo)’s itinerancy, Molly grieves her family’s dissolution and the seemingly hopeless state in which her mother, and the planet, now lingers. Meanwhile, Johnny’s hindsight knowledge of the island’s history and encounters with an uncertain future lead him to question whether the progress he seeks can ever truly exist. As memories and revelations bring difficult truths, the characters must plumb their inner depths and find peace in an ever-changing world.

The piece’s unique temporal setup and interconnected stories work uncannily well within its immersive framework, allowing us to receive the show’s entire story while following our respective tracks. Our early introduction to the piece’s themes and the “rules” of the house’s world helps us suspend disbelief: we accept the communication between characters from different time periods as we would the logic of a dream, or of a memory itself. As such, overhearing sounds of scenes from other rooms lends a feeling of echoed experience rather than one of missing out.

Additionally, such overlap heightens the piece’s emotional realities, giving us intimate moments with the characters as well as access to their tales’ role within the larger historical, environmental, and interpersonal contexts they inhabit. These parallels emerge most clearly in Fountain’s battle against the tangible consequences of climate change, Molly and Johnny’s pain and hope in the face of loss, and Enceladus’s wonder and tenderness toward the human lives her walls encompass.

As universal, and as personal, as the water, homes, and memories we share, Water, Water, Everywhere... reminds us of our capacity to hold multitudes. Forming a thematic link and a font of human experience, the piece’s aquatic motif highlights life’s beauty and fragility, while re-affirming our interconnectedness and responsibility to preserve that which we value. Whether our memories stay frozen in time, blur and shimmer like steam, or flow through our daily lives, Water, Water Everywhere... guides us to access them with reverence and care.

(Water, Water, Everywhere... plays at Governors Island, House 404A, Colonels Row through October 27, 2019. The running time is 80 minutes, no intermission. Performances are Saturdays and Sundays at 2 and 4:30. Tickets are $30 ($50 for the "double feature" to see both shows on certain days) and are available at exquisitecorpsecompany.com.)