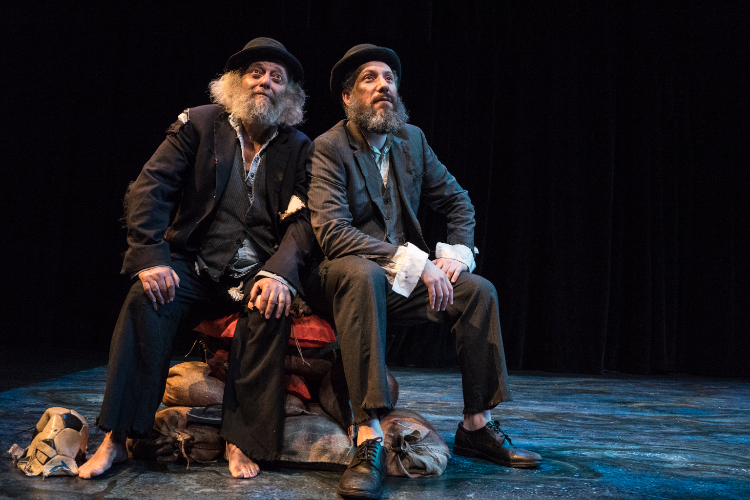 As the lights come up on the Yiddish version of Samuel Becket’s 1953 play Waiting for Godot, Estragon (the powerful David Mandelbaum] is sitting on a bunch of burlap sacks. He looks miserable—his clothes are ripped, his ankles are bare, his shoes are worn. His friend Vladimir (the equally powerful Eli Rosen) is nearby; the two are bickering in a tiresome back-and-forth that seems destined to go nowhere. It’s obvious that this is not the first time the pair have engaged in this particular banter. In fact, as the play quickly reveals, the duo has basically been joined at the hip for 50 years, since meeting as seasonal farm laborers in an unnamed locale.  An odd couple, yes, but one that is by turns tender and loving and hostile and testy. Their mission, vigorously enforced by Vladimir, is to wait for the never-seen Godot, someone Vladimir assumes will provide them with shelter and food. If only…

As they wait, Estragon and Vladimir encounter Pozzo (played with feverish vitriol by Gera Sandler), a presumably rich landowner who is dragging a roped-in quasi-slave, ironically named Lucky (played with shocking docility and subservience by the terrific Richard Saudek), subjecting him to all manner of heinous verbal and physical abuse. As Estragon and Vladimir speak with them, a host of questions arise: Can they help Lucky? Should they try? Or is it in their best interest to sidle up to Pozzo and win his affection? Can anything be gained by uniting against an oppressor? Can expressing solidarity with the downtrodden and clearly desperate Lucky be of tangible benefit to them? Does that matter?

Such philosophical inquiries are front and center in Beckett’s play. Other issues—whether to stay in a relationship that drives you crazy but is comfortable and familiar, and whether it is wiser to wait for redemption or take direct action oneself—are as relevant today as they were when the play was first performed 66 years ago.

Nonetheless, this version of Godot is too long, especially for audience members who need to rely on supertitles to understand what’s happening. At a certain point tedium takes over and the play feels interminable, as if we, too, are waiting for Godot to rescue us. Despite this, Beckett’s masterwork remains potent. Indeed, the play hammers an essential point and serves as a salient reminder that there are no saviors. As the truism—sadly of unknown origin—reminds us, we are the ones we’ve been waiting for.