the way she spoke 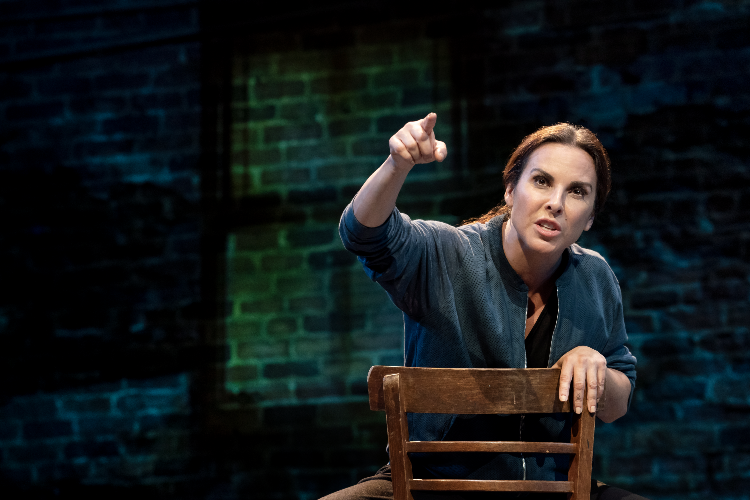 Kate del Castillo in the way she spoke. Photo by Joan Marcus.

BOTTOM LINE: An ambitious, but emotionally flat, exploration of the misogyny that has led to the disappearance and murder of more than 1500 women and girls in Juarez, Mexico.

A play about the murder and disappearance of more than 1500 women should leave the audience in tears, shaken and angry. But Isaac Gomez’s latest (following La Ruta) piece the way she spoke—a one-woman exploration of the violent and bloody femicide that has riddled the border city of Juarez, Mexico, since 1993—fails to deliver.

Actor Kate del Castillo (star of Telemundo’s La Reina del Sur) is the play’s never-named sole character. The set-up is intriguing. Initially, she presents herself as an undergraduate at the University of Texas-El Paso, a city located directly across the border from Juarez. Although the character notes that she was born in Mexico, she tells the audience that she has not been back since she was twelve. Nonetheless, she confesses that she is “research-obsessed” and feels compelled to learn as much as she can about the seemingly never-ending violence that targets female teenagers, children, and adult women.

Enlisting the help of her childhood friend Blanca and Blanca's mother, del Castillo's character visits several families of the dead or vanished. What they—and consequently we—learn is heartbreaking. Some parents report that the bodies of their loved ones were found mutilated and battered but the perpetrators were never caught. Even worse, they note that the police seem uninterested in finding the culprits. What’s more, they acknowledge that women in Juarez have become increasingly fearful, and despite a handful of valiant feminist organizing efforts, most community members are too terrified to protest or demand better.

Everyone, however, is on edge. Another interviewee, Sandra, was until recently a bus driver charged with transporting workers from the city center to the sweatshop-like maquiladoras, or factories. Sandra reports that she finally quit, frustrated that she could not protect her riders from being abducted. She explains that the bus company forced her to drop her passengers off on random street corners, rather than at their homes, leaving them to walk the final blocks alone. She wonders, is the company complicit in what has been happening?

del Castillo tells a boatload of horror stories. Nonetheless, they feel flat, even distanced. Perhaps this is because her speech is so rapid that it doesn’t give the audience adequate time to fully absorb the magnitude of the material. It’s a pity, because the information has the potential gravitas to keep viewers on the edge of their seats. Sadly, this potential is squandered.

These deficits are compounded by del Castillo's frequent character shifts, in which she moves from college coed to other personas. For example, at several points in the play she becomes a critic and shoots questions at Gomez about the script he's written. It’s distracting, and makes for a disjointed narrative. Other digressions also occur: at one point del Castillo plays a man who has been arrested for brutalizing women, something he denies. The transition is awkward, and while it adds dimension, it’s a jarring switch.

Still, there is merit in the way she spoke. Some of what’s said is extremely effective—especially near the end, when del Castillo reads the names and ages of several dozen women and girls who've either gone missing or were eventually found dead. It’s a raw moment. In addition, Riccardo Hernandez’ scenic design and Aaron Rhyne's projection design are stellar. Images projected onto the theater’s back wall are a subtle complement to the spoken word and beautifully illustrate what del Castillo describes. At one point, walls of posters bearing the likenesses of the missing ask anyone with information to call a hotline number. At other times, we see row upon row of homemade pink crosses, spontaneous memorials that have been erected in vacant lots throughout Juarez.

These images are a powerful reminder of how unsafe the world can be for women and girls, not just in Juarez, but everywhere. In fact, the way she spoke is something of a call to arms, for despite its flaws, the show suggests that, no matter what, we have a moral obligation to be our sisters’ keepers.

(the way she spoke plays at the Minetta Lane Theatre, 18 Minetta Lane, through August 18, 2019. The running time is 80 minutes. Performances are Tuesdays through Fridays at 7; Saturdays at 2 and 7; Sundays at 3. No performance Friday 7/20. Ticket prices run from $23 to $50 and are available at ticketmaster.com, audible.com, or minettalanenyc.com.)