Written and Performed by Dean Temple; Directed by
Part of the 2019 FRIGID New York Festival 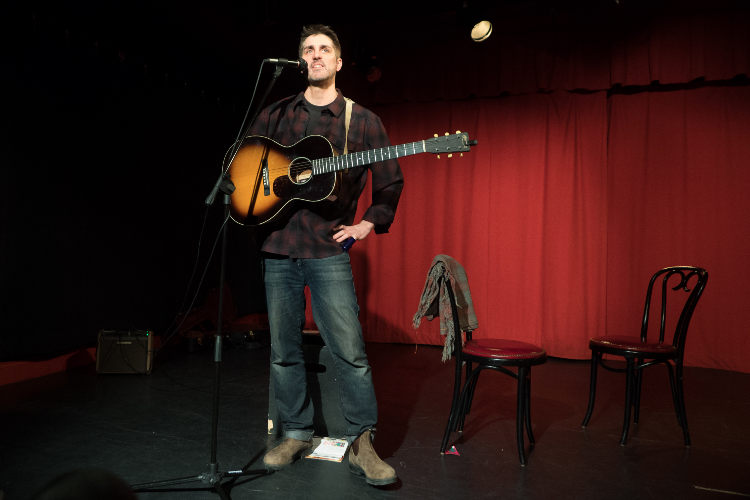 Dean Temple in Voice of Authority. Photo by Todd France.

BOTTOM LINE: The witty and charming Dean Temple uses stand-up, singing, and other ways of storytelling to delve into his existential crisis of wanting to be a performer versus having a more conventional job.

Voice of Authority, written and performed by Dean Temple, is a perfect example of enjoying the journey. Not everything in life is about the end result, but it’s about the paths you explore on the way there. Dean Temple weaves this tale with myriad mediums to share his strange, yet true, story about being sued for $19 million dollars by the US Department of Justice, with some great quips sprinkled throughout.

As Temple progresses through his performance he at times breaks the fourth wall, discussing the space between performer and audience by talking candidly with those in the audience (if you’re in the front row he might hold your hand to illustrate the beauty and magic of this connection.) He is quite straightforward about being vulnerable; at first this might seem like he is mocking performers, but it becomes clear he is in fact being honest and raw with us.

Another layer to Temple’s storytelling extends into the stand-up comedy realm. With a bright spotlight and a handheld microphone he goes into shtick, giving us another flavor of his storytelling methods. Another, quirkier, construct is when he speak-sings while playing guitar, and “No Damn Luck Today” turns out to be quite the catchy song. Temple also embodies other people in his life, taking on their physicality and speech patterns. This proves quite amusing, especially when he plays his friend Zachary, an eighty-year-old retired dancer. These elements add depth and dimension to a plot that only goes so deep.

While I enjoyed the methods of storytelling, I would have loved more details about the $19 million dollar lawsuit. He touches upon it many times, but concentrates more on asking questions like, “What do you want versus what your parents told you you want?” The lawsuit seems to just facilitate the introduction of deeper issues, like evaluating if he is the kind of person who wants to stick his neck out for his uncle (who put him in the middle of this mess) or save himself. Making these hard choices, and deciding if you’re going to suffer for what you love or work hard for a job that you don’t enjoy, is all the “mud that makes your brick.”

Voice of Authority teeters on the edge of a more amateur open-mic-night feel, but the witty, charming, and handsome Dean Temple is talented enough to tie it all together in a nice package.

Voice of Authority is written and performed by Dean Temple.